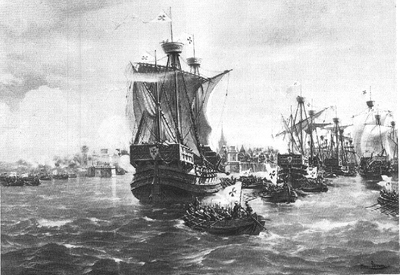 The Victual Brothers were a loose group of mariners operating in the Baltic Sea and the North Sea between 1390 and about 1440.  They were originally assembled by the Dukes of Mecklenburg (Germany) to assist in the opposition to the Kingdom of Denmark, which was attempting to subdue the Kingdom of Sweden (an ally of Mecklenburg).  The mariners acquired their name from their early missions of bringing food and other supplies to the besieged city of Stockholm.  The Brothers quickly transitioned into a fighting force, opposing Danish naval vessels, particularly in Baltic waters.  In 1392, the Brothers attacked the powerful Hanseatic town of Lübeck, the only Hanseatic town supporting Denmark.   Other Hanseatic towns and allies, including Rostock, Ribnitz, Wismar, and Stralsund, provided the Brothers with safe harbors in which to repair, refit, and resupply their vessels.  As the conflict between Denmark and Mecklenburg/Sweden wound down, the Brothers transitioned into piracy, seizing ships for their valuables, not their political or military affiliations.  In 1393, they sacked the town of Bergen (Norway) and in 1394, they conquered Malmö (Sweden) and held it for a short time.  They also plundered a number of other towns along the coasts of the Baltic and North Seas.  The Brothers, by now known as the Likedeelers (Equal Sharers), established their main base at Visby, on the island of Gotland in the Baltic Sea in 1394.  By then, the Likedeelers had succeeded in uniting the Danes and the Swedes in their opposition to piracy.  Gotland was conquered and the pirates disbursed, many going to Friesland.  During a sea battle in 1400 off Helgoland, the most notorious of the Likedeelers, Klaus Störtebeker, was captured along with a number of his crew.  They were taken to Hamburg.  After a short trial, they were all beheaded.  Piracy by followers of the Likedeelers continued, albeit at a lower level, until about 1440, when the nations in northern Europe became sufficiently powerful and organized to stamp it out.