A ruthless and fearless Portuguese explorer 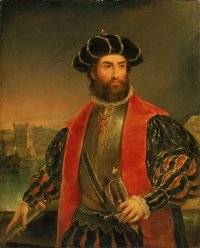 Vasco da Gama (1460s – 1524) is rightly credited with opening the India trade to Portugal.  In 1492, when da Gama was probably in his late twenties, he impressed King João II, who had sent him on a mission to the Algarve (southern Portugal) to attack French ships in retaliation for previous French attacks on the Portuguese.  Da Gama’s swift assaults on French ships brought an end to French attacks.  In 1488, Bartolomeu Dias proved the existence of an all-water route from Europe to India.  In 1497, when Portugal was finally ready to mount an expedition to India, King Manuel I (who had ascended to the throne in 1495) selected da Gama as the expedition’s leader.  Four ships, with a total crew of 170, departed Lisbon on July 8 on the longest voyage ever attempted by the Europeans.  Rounding the Cape of Good Hope, the expedition worked its way up the east coast of Africa.  Receiving little hospitality in Mozambique, da Gama fired his cannons into the local port as his ships departed.  They attacked and looted Arab ships as they continued up the coast.  Enlisting the services of a pilot in what is now Malindi, Kenya, the expedition crossed the Indian Ocean with the prevailing monsoon winds and landed near Calicut, India on May 20, 1498.  The King of Calicut was not particularly impressed with the Portuguese trade goods, but da Gama was still able to obtain Indian merchandise valued at more than 50 times the cost of the entire expedition.  He precipitously ordered the fleet to begin the return voyage, despite warnings from local mariners that the winds were against him.  Crossing the Indian Ocean from Africa to India had only taken 23 days.  The return to Africa, against the winds, took 132 days.  Approximately half the crew died and many of the survivors contracted scurvy.  Two ships from the expedition arrived back in Lisbon in the summer of 1499.  Da Gama was richly rewarded and became a national hero.  He led another expedition in 1502-03, again bringing back a rich cargo.  Along the way, though, he attacked Arab ships without provocation.  On one occasion, after looting a large Arab pilgrim ship, he locked the hundreds of passengers on board, including women and children, in the hold and set the ship on fire.  In 1524, King João III sent him back to India to serve as Viceroy.  Da Gama contracted malaria shortly after his arrival in Goa and died on December 24, 1524.