The last US warship to sink an enemy warship in combat 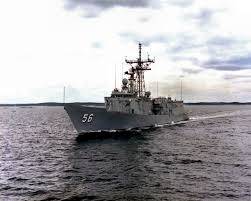 The guided missile frigate USS Simpson (FFG-56) is named for RADM Rodger W. Simpson, USN (1898-1964), who commanded Task Group 30.6, which sailed into Tokyo Bay and conducted the emergency evacuation of hundreds of sick and starving Allied prisoners of war in waterfront areas before the actual signing of the instrument of surrender.  The Oliver Hazard Perry-class vessel was commissioned in 1985.  In January 1986, the frigate participated in search and rescue operations following the Space Shuttle Challenger disaster.  In January 1988, Simpson was deployed to the Persian Gulf to escort reflagged Kuwaiti oil tankers during the Iran-Iraq War.  On the morning of 18 April 1988, Simpson and two other US Navy warships destroyed Iranian naval and intelligence facilities on the offshore oil platform Sirri in the Persian Gulf.  Later that day, the ships encountered the Iranian Kaman Class missile patrol boat Joshan.  Despite radioed warnings to the Iranian vessel to cease approaching the US Navy vessels, Joshan maintained its course and then launched a Harpoon ship-to-ship missile.  Simpson immediately responded by firing a Standard ship-to-ship missile.  The Harpoon missile missed its target.  The Standard missile did not.  Simpson fired three more missiles, destroying the Iranian vessel.  No US warship has sunk an enemy combatant since.  On 20 February 1990, while patrolling the Strait of Hormuz, Simpson was diverted to assist the tanker Surf City, carrying naphtha and gas oil.  Surf City had suffered an explosion and fire that killed two crew members and forced the others to abandon ship.  Simpson rescued the 22 surviving crew members.  Surf City continued burning for two week.  Simpson was decommissioned on 28 September 2015, the last frigate of its class in service in the US Navy.