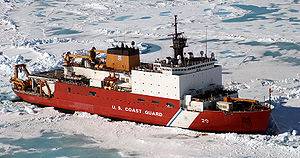 The icebreaker USCGC Healy (WAGB-20) was constructed by the Avondale Industries shipyard in New Orleans and launched on 15 November 1997.  Commissioned on 10 November 1999, it is named in honor of Revenue Cutter Service Captain Michael A. (Hell Roaring Mike) Healy, the commanding officer, in succession between 1877 and 1895, of the USRC Chandler, USRC Thomas Corwin, and USRC Bear.  As such, he was the most prominent representative of the federal government in the Territory of Alaska, acting as judge, doctor, and policeman to Alaskan natives, merchant seamen, and whaling crews.  He carried renowned naturalist John Muir into Arctic waters in the 1880s and introduced reindeer from Siberia into Alaska as part of an effort to improve food, game, and clothing availability for Alaska natives.  After commissioning, CGC Healy transited the Northwest Passage en route to its homeport of Seattle.  The 420-foot long, 16,000 ton vessel is rated as a medium icebreaker.  Its diesel-electric engines power two fixed-pitch four-blade propellers to a maximum speed of 17 knots.  It has the capability for continuous breaking of 4.5 foot thick ice at three knots.  Backing and ramming, it can break through ice up to eight feet thick.  It has accommodations for nineteen officers, twelve chief petty officers, 54 enlisted personnel, 35 scientists, and can carry seventeen more persons when necessary.  Designed as a research platform, it has laboratories for bio-chemical, electronics, meteorological, photographic, and general science.  In January 2012, Healy escorted the Russian ice-capable tanker Renda through the ice to deliver emergency fuel to Nome, Alaska.  Healy has voyaged to the North Pole twice.  The first time was on 6 September 2001 in company with the German research icebreaker Polarstern.  The second time was on 5-7 September 2015 while on the Geotraces Expedition for the National Science Foundation.