Too much cargo, not enough Yangtze

Deepening the Yangtze should be priority number one as manufacturers move their factories inland.

The Yangtze River is the traditional boundary dividing north and south China. It has been both a critical a source of life and the bearer of tragic floods that have claimed thousands of lives through the ages.

But the river has always been the country’s most important inland transport corridor and it’s role into the future will be to consolidate this function and support the factories moving inland from the Pearl River Delta and other coastal regions.

Manufacturers are fleeing the sharply rising costs in coastal provinces that include more expensive labour, the end of tax rebates on exports, anti-pollution measures, and other initiatives aimed at improving quality of life.

However, as with most things in modern China, scale is the problem. Cargo carried by container lines is the large volume, lower margin stuff that fills up clothing and toy stores in the big western markets, or heavy and bulky stuff that is sold by furniture retailers.

There are hundreds of thousands of factories involved in the production of these items and in the supporting industries that complete the products – paint and dye manufacturers, chemicals and plastic producers, packaging plants, glue makers, etc, etc.

The reason factories set up shop close to the ocean in the first place was because of the proximity to the ports. Raw materials coming in and finished goods being shipped out do not have far to go.

Manufacturers moving inland need the same access to transport and that means setting up on the banks of the mighty Yangtze River. Road and rail networks are in place, but sending boxes long distance by road is costly and inefficient (extortionate tolls, chronic traffic jams, theft) or, in the case of rail, in short supply.

Unfortunately, the Yangtze River is no so mighty these days. A crippling drought has seen its waters drop to alarming levels, creating havoc with navigation. Even at Wuhan, a third of the way up the river from Shanghai, the water depth was down to 2.8m and vessels have at times been unable to reach the city.

By 2015 it is estimated that the ports along the Yangtze would be sending more than seven million TEUs down the river. With the draft constraints, that would require a staggering number of small river trade vessels, creating a congestion nightmare. Already the locks on the river are overcrowded.

Part of the 12 five-year plan involves dredging the river to a dry season 4.5m, which will allow larger vessels to lower the unit cost of containers while cutting down on traffic choking the waterway.

Deepening the channel should be one of the main priorities, because Beijing’s “Go West” initiative is picking up speed and there is no turning back now.

The Los Angeles master plan is a revamp 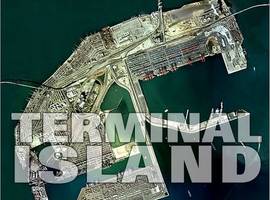