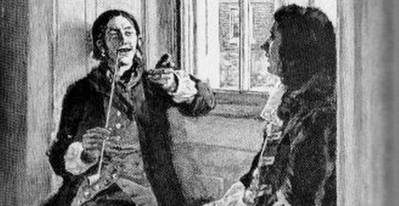 Thomas Tew’s reputation centers on one amazingly successful pirate voyage.  His date and place of birth are unknown, but he was certainly British.  He lived in Newport, Rhode Island in the 1680’s and may have been married and may have had two daughters.  The extent of his maritime background is uncertain, but he turned up in Bermuda in 1691, where he obtained letters of marque, allowing him to attack French and Spanish merchant vessels.  In 1692, he obtained backers and acquired the seventy-ton sloop Amity, along with authorization from the governor to attack a French factory (large trading post) with another privateer on the African coast at the mouth of the Gambia River.  When the other privateer sprung a leak and turned back, Tew convinced his crew to turn to piracy.  Based on rumors of rich pickings, Tew set his sights on the Red Sea, which he reached by way of Cape Town and Madagascar.  Entering the Red Sea, they soon overtook the Mughal Empire treasure ship bound for trade with the Ottoman Empire.  The Mughal ship had some 300 soldiers on board, in addition to its crew.  Despite the odds, Tew attacked, catching the Indians unprepared.  Surrender came with little resistance.  The pirates seized as much gold, silver, ivory, spices, and silk as their smaller vessel could hold.  Tew wanted to continue attacking targets, but the crew voted to return home to North America.  After all, they had a cargo valued at £100,000, making Tew a multi-millionaire in modern terms.  After payment of appropriate bribes, Tew was issued a full pardon and became good friends with the governor of New York.  Within two years, his friends, supporters, and former crew convinced him to make another piratical voyage to the Red Sea – but this one did not end well.  Arriving in September 1695, he fell in with several other pirate ships, including the powerful Fancy, commanded by Henry Every.  Tew and his men attacked the Mughal treasure ship Fateh Muhammed.  This time, the Indians on board were prepared.  In the heavy cannon fire, one shot struck Tew in the abdomen.  He reportedly caught his intestines in his arms before falling fatally to the deck.  The remaining crew surrendered and were temporarily captured.  Henry Every soon launched a second, more successful attack, capturing the Fateh Muhammed and freeing the surviving crew of the Amity.