The state maritime academy on the Gulf coast 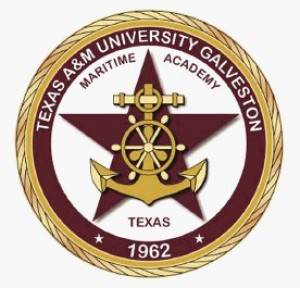 Texas A&M University (originally the Agriculture and Mechanical College of Texas) has two campuses: College Station and Galveston.  Texas A&M University at Galveston is home to the Texas Maritime Academy, one of six state maritime academies in the United States.  Since its founding in 1962 as a marine laboratory, the Galveston campus has maintained a distinct maritime focus.  Texas Maritime Academy dates from 1965, when the federal government donated the former USS Queens for use as a training vessel.  The 473-foot long Queens had served as a troop transport during World War II and then as a passenger ship.  It was renamed Texas Clipper in recognition of its rounded or “clipper” stern.  Upon retirement in 1994, it was replaced by Texas Clipper II, which had been the Navy hydrographic survey vessel USNS Chauvenet.  Sirius (ex-USNS Sirius) was the Academy’s training vessel between 2005 and 2009 until replaced by the SS Cape Gibson, which in turn was replaced in 2012 by the TS General Rudder (ex-TV Kings Pointer).  TS General Rudder is named for Texas A&M graduate James Earl Rudder, who commanded the Army Rangers during the scaling of Pointe du Hoc during the D-Day invasion of France.  Members of the Corps of Cadets at the Academy (commonly referred to as Sea Aggies) join one of four groups: (1) the Merchant Marine Licensing (LO) program; the Strategic Sealift Officers (LO/SSO) program; the Naval Reserve Officer Training Corps (NRPTC) program; and the Drill and Ceremonies (D&C) program.  The LO program trains participants for careers as either deck or engineering officers in the US Merchant Marine.  The LO/SSO program is similar, but includes training to assist the Navy in times of war or mobilization by augmenting the Navy’s sealift program.  The NROTC program trains cadets to serve as officers in the Navy Reserve.  The D&C program is for individuals who desire to live the regimented lifestyle of the Corps and to improve leadership skills, but without the commitment to the other programs.  Cadets in the licensing programs make three cruises on the Academy’s training ship and one cruise on a commercial vessel.