A coastal belt, of varying thickness 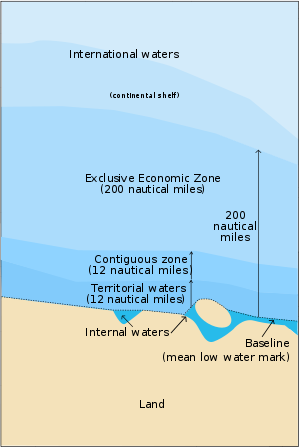 The territorial sea is the belt of coastal water extending from a nation’s baseline over which the nation exercises sovereignty. The baseline is usually the shoreline, defined more precisely as the mean low-water mark. In certain places, such as the mouth of a river or bay, an artificial baseline is drawn across the opening. The width of the territorial sea has varied over time. Originally, it was loosely defined as the area that the nation could physically defend by force of arms from the shore. This came to be called the cannon-shot rule and roughly worked out to three nautical miles, which was about as far as a cannon ball could be fired from a coastal fortress. Later, most nations accepted the idea that the territorial sea should be a uniform three nautical miles in width, whether or not there was a fortress nearby. Some nations, though, traditionally espoused different claims. Iceland claimed two nautical miles, Norway claimed four, Spain claimed six, and Mexico claimed nine. Within the territorial sea, the coastal nation exercises sovereign rights, with one exception. Ships of other nations are allowed to peacefully transit through the territorial sea while passing from one portion of the high seas to another: so-called “innocent passage”. The traditional concept of the territorial sea was enshrined in the 1958 International Convention on the Territorial Sea. Because a consensus could not be reached regarding the breadth of this zone, none was defined in the Convention. The international community met again in 1960 to define the breadth of the territorial sea. While the majority favored a six-mile limit, again a consensus could not be achieved. As offshore fishing became more intense in the 1960s and 1970s, various coastal nations (particularly in Latin America) reacted by claiming expansive territorial seas of 200 or even 300 miles. These claims were only enforced, if at all, against foreign fishing vessels. Finally, agreement was reached in the 1982 United Nations Convention on the Law of the Sea (UNCLOS) that the territorial sea should not exceed twelve miles in breadth. The United States, though not a party to UNCLOS, claims a 12-mile territorial sea for international purposes and a 3-mile territorial sea for many domestic purposes.