A docile, nocturnal shark of the Indo-Pacific region 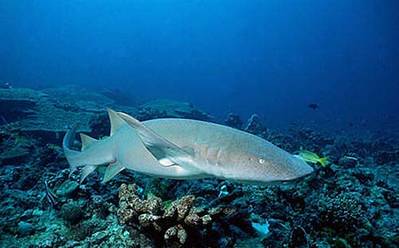 The tawny nurse shark or sleepy shark is the only extant member of the genus Nebrius and is found primarily in coastal areas of the Indo-Pacific region.  It is a nocturnal hunter, spending its daytime inside submarine caves and under ledges.  Recently, small groups of the tawny nurse shark have been observed in and near the caldera of submarine volcanoes.  It grows up to ten feet in length.  On its dorsal surface, the tawny nurse shark is generally gray-brown to brown but can tend toward yellow or red, depending on its background habitat, the animal having the ability to somewhat alter its coloration.  The ventral surface is paler.  Juveniles have small dark spots, particularly in the dorsal area.  The first dorsal fin is larger than the second.  The pectoral fins are narrow and sickle shaped.  The caudal fin comprises almost one-fourth of the total body length.  The upper lobe is shallow, while the lower lobe is barely present.  The teeth are greatly compressed, comb-like in shape and arranged in an overlapping pattern.  The functional teeth are separated from the replacements by a narrow toothless space.  The tawny nurse shark feeds on a wide variety of benthic marine invertebrates, including octopus, crustaceans, and sea urchins, as well as small fish.  It tends to swim along the seafloor and explores holes and crevices.  Upon detection of prey, it uses suction to draw out-of-reach prey into its mouth with great force.  The female retains fertilized eggs in her uterus, giving birth to litters of eight pups, each about eighteen inches in length.  It has no known predators and is seldom targeted by humans, but is taken as by-catch.  The tawny nurse shark tends to be docile, sometimes allowing divers to touch it, but should be treated with respect due to its size, strong jaws, and sharp teeth.  Its most significant threat is habitat loss.