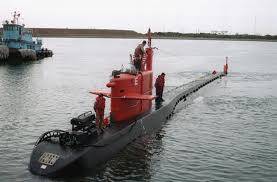 The US Navy submarine NR-1 was the smallest nuclear submarine ever built and the only US Navy submarine to never be commissioned.  Launched in 1969, it had been built largely as an experiment by Admiral Hyman Rickover to determine whether such a small vessel could meet his exacting requirements.  He refused to commission the boat so as to avoid Congressional and bureaucratic oversight.  His efforts to have follow-on submarines built failed due to budget constraints.  The NR-1 (which never had an official name but was called Nerwin) was only 147 feet long and twelve feet wide.  It carried a crew of thirteen and could stay submerged for three weeks, but had no kitchen or bathing facilities.  What it did have was a sophisticated suite of electronics, excellent maneuverability, ports for viewing, mechanical arms, and cameras.  It also had retractable wheels that were deployed when the craft reached the seafloor.  The wheels allowed the NR-1 to maneuver along the seafloor, making meticulous maps, photographing everything, and retrieving items of interest.  Most of its missions were classified, but several were disclosed to the public.   In 1976, a fighter jet fell overboard from an aircraft carrier and sank.  The jet was armed with a new, highly classified air-to-air missile.  The NR-1 was used to recover the missile.  When the Space Shuttle Challenger exploded after liftoff from the Kennedy Space Center in 1986, the NR-1 was deployed to search for and recover the remnants from the floor of the Atlantic Ocean.  It was able to continue operations even when heavy weather forced to surface units to seek shelter.  In 1995, the NR-1 assisted Dr. Robert Ballard in his exploration of the wreck of the hospital ship Britannic, which sank in the Mediterranean Sea during World War I.  The submarine spent its entire operational life homeported in Groton, Connecticut.  It was taken out of service in 2008, its reactor was removed, and the vessel was partially disassembled.  Now, portions of the NR-1 are being returned to the Groton submarine base for display in the museum.