A common passenger ship remembered for its inglorious sinking 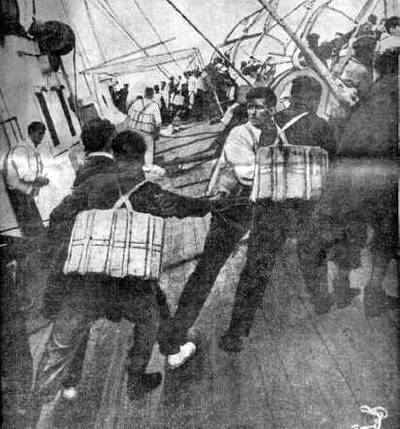 The SS Vestris was built in Belfast and launched on 16 May 1912.  Unlike the Titanic, built in a nearby shipyard at the same time, its launching received little notice because there was nothing unusual about the Vestris.  At 10,494 gross tons and 496 feet in length, it was fairly typical for mixed passenger and cargo ships of the era.  When built, it was rated to carry 280 first class passengers, 130 second class passengers, and 200 third class passengers.  The Vestris and her sisterships Vandyck and Vauban were owned by Lamport & Holt and intended for service between New York, Buenos Aires, and Liverpool – the so-called River Plate trade.  Other than service as a troop ship during World War I, this trade was the mainstay of the ship.  On 10 November 1928, the Vestris departed New York for Buenos Aires with 129 passengers and 196 crew members.  On 11 November, the ship ran into severe weather off the mid-Atlantic coast.  Rolling heavily, some of the cargo and the coal bunkers shifted, resulting in a starboard list.  A coal port on the starboard side had been left partially open.  There was some indication that the coal port was faulty, but also speculation that it was left open intentionally to provide fresh air to the hot and humid engineering spaces.  Water came in through the coal port, further increasing the list.  While the officers urged that a distress message be sent, the master delayed.  Finally, on 12 November, the master authorized the radio officer to send an SOS, by which time the ship was listing heavily and only one boiler was still producing steam for power.  Unfortunately, in the confusion, the position given in the distress message was 37 miles in error, delaying the arrival of rescue ships.  The passengers and most of the crew assembled to abandon ship, all wearing cork-filled life vests.  In a combination of panic and confusion, the crew launched most of the lifeboats with few passengers on board.  The life vests proved of little value to those who fell into the heavy seas.  Of the 129 passengers, only 60 survived, while 155 of the 196 crew members lived through the experience.  None of the 13 children on board survived and only eight of the 33 women on board survived.  The master went down with the ship.  The marine casualty investigation was one of the first to include actual photographs taking during the distress.  Due to adverse publicity, the company ceased operations the next year.  The disaster was a major impetus in the rapid phasing out of cork-filled life preservers and emphasized the importance of the prompt and accurate transmission of distress messages.