Making a legendary transit of the Northwest Passage in 1969. 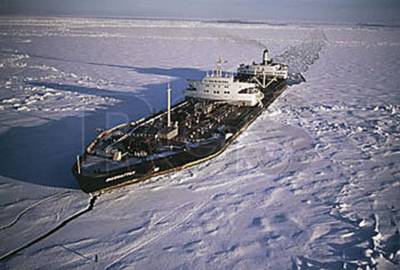 When the tanker Manhattan was launched in 1962, it was the largest commercial vessel built in the United States.  For six years, it pursued the usual trade of tankers.  Everything changed in 1968, when large reservoirs of crude oil were located under Alaska’s North Slope.  Exxon, one of the major leaseholders for those reserves, quickly realized that there were only two methods for getting the oil to market.  One was to use tankers to bring the oil to the East Coast, where most of the consumers lived.  The other method was to build a pipeline to an ice-free port in southern Alaska for shipment to the West Coast.  Exxon decided to try the first method.  It chartered the Manhattan and undertook major modifications.  Sheathing was placed along both sides of the tanker and in other vulnerable locations to protect against ice.  A specially designed icebreaker bow replaced the traditional one.  When the work was completed in the summer of 1969, the Manhattan immediately set sail on its historic voyage.  This was to test the feasibility of transiting through the Northwest Passage from the Atlantic, loading oil in Prudhoe Bay, Alaska, and returning to the East Coast.  On its westward passage, it was escorted by the Canadian icebreaker John A. Macdonald and the US icebreaker Northwind.  On the return voyage, it was escorted by the Canadian icebreakers John A. Macdonald and Louis S. St-Laurent and the US icebreaker Staten Island.  Upon arrival in Prudhoe Bay, one 55-gallon drum of oil (painted gold) was loaded on the main deck.  The voyage was hailed as a success upon the Manhattan’s arrival back on the East Coast.  Further testing that winter at Pond Inlet off Baffin Island showed that year-round operations in the Arctic were not feasible.  The Manhattan was returned to its owner and the oil company consortium built the Trans-Alaska Pipeline.  The owner removed the sheathing, but retained the distinctive icebreaker bow.  The ship engaged in varied service thereafter, sometimes hauling grain.  On October 30, 1987, the Manhattan grounded off Yosu, South Korea during a typhoon.  It was salvaged and scrapped in China later that year.  On a personal note, I was seconded to the Manhattan during its westward voyage in 1969.  I also remember seeing the ship at anchor in San Francisco Bay on several occasions during the 1970s.  It was always an impressive sight.