The fish with hands 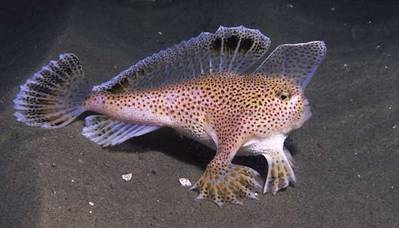 The spotted handfish (Brachionichthys hirsutus) is a critically endangered fish found only in the waters in and around Storm Bay near Hobart, Tasmania.  It is a pear-shaped benthic fish, found on the seafloor at depths averaging 15 to 50 feet and preferring coarse to fine sand habitats.  It is cream in color, with numerous dusky spots or stripes.  It is small, with a maximum length of about four inches.  While capable of normal swimming like other bony fish, the spotted handfish prefers to walk across the seafloor using its highly adapted pectoral fins.  These pectoral fins roughly resemble human hands, but with seven spines rather than fingers.  Its body is covered with close-set, non-overlaying scales.  It has a small projection or lure just above its mouth, which may serve to entice prey.  The handfish mostly eats small shellfish, shrimp, and worms found on or near the bottom.  They spawn primarily in the southern hemisphere spring, with the female laying several hundred eggs on vertical objects such as sea squirts, sea grass, or sponges.  The handfish are not targeted for hunting by humans.  Their two biggest threats are habitat loss and an introduced species of northern Pacific starfish (Asterias amurensis), which prey on its egg clusters.   It is estimated that there are fewer than 100 spotted handfish remaining in the wild.  The Spotted Handfish Recovery Team in Tasmania has begun a captive breeding program.  The initial work has been successful and the captive population may be used in a future re-introduction program to restore the fish to some of its previous range.