The grouping of richly-laden ships for mutual protection 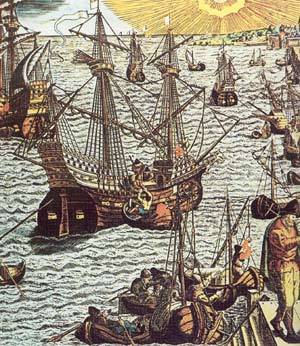 The Spanish did not invent the convoy system, where a number of ships sail together to provide mutual protection.  Convoys were utilized by the Greeks and Romans and, perhaps by the ancient Egyptians.  The Spanish, though, regularized the process.  Soon after the colonization of the New World by Spain, large amounts of gold, silver, and other valuables began to be carried from there to the treasury of Spain.  Privateers (sailing under Letters of Marque) and pirates would sometimes attack these rich targets.  In 1555, the French privateer Jacques de Sores attacked, burned, and sacked the city of Havana, the departure point for ships heading from the Spanish colonies to the motherland.  King Philip II tasked Admiral Menéndez de Avilés with preventing a recurrence.  The Admiral planned for a large fort (Castillo del Morro) built in the port of Havana and instituted a system of strict control over trade between Spain and its New World colonies.  The Casa de Contratación was established in the port of Seville.  All commerce between Spain and the New World was required to originate/terminate in Seville and commercial ships were required to transit in groups, often escorted by warships.  This system had two intended purposes: first, to minimize the threat posed by pirates and privateers; and second, to minimize smuggling by Spanish commercial interests.  The Spanish treasure convoy system was immensely successful in meeting the first goal.  In the 230 years that the convoy system was in effect, few ships in a convoy were successfully attacked.  Unfortunately for the Kings of Spain, though, the convoy system was spectacularly unsuccessful in reducing smuggling.  It is estimated that upwards of 50% of the cargoes transported from the Spanish colonies back to Europe were undeclared (and thus untaxed).  Regardless, the convoy system remained in effect until about 1800, when the various Spanish colonies in the New World began winning their independence.