An undistinguished rock now under an international spotlight 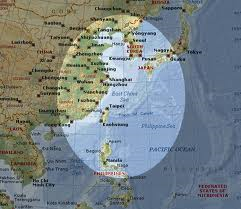 Socotra Rock (not to be confused with Socotra Island in the Gulf of Aden) is a submerged rock in the northern portion of the East China Sea.  It lies about 15 feet below the surface, the apex of a rocky peak or sea mount rising about 200 feet above the seabed.  The nearest point of dry land is South Korea’s Marado Island, about 80 nautical miles northeast.  Japan’s Torishima Island is about 148 nautical miles to the east and China’s Zhejiang (Sheshandao) Island is about 178 nautical miles to the west.  South Korea calls the rock Ieodo and has built an oceanographic and meteorological platform on its slopes that extends 140 feet above the sea’s surface and has a helicopter pad on top.  The Chinese Government refers to it as Suyan Rock.  Since it is a submerged rock, international maritime law prevents any nation from making territorial claims, also eliminating any assertion of territorial waters around it.  Because all three nations are less than 200 nautical miles distant, the rock obviously lies within an exclusive economic zone (EEZ), but the maritime boundaries in these waters have never been officially delimited.  Although no scientific analysis has been done, it is expected that oil and gas reserves exist in the seabed adjacent to the rock.  The first known documentation of the rock was by the British merchant vessel Socotra in 1900 and it was first surveyed by another British vessel in 1910.  South Korea placed a bronze marker on the rock in 1951, naming it for the island Ieodo, from Korean legend.  Construction of the platform commenced in 2002 and was completed the next year.  China does not recognize any assertion of authority over the rock by South Korea and occasionally overflies the platform and operates government vessels nearby.  Recently, China announced a new air defense identification zone (ADIZ) over portions of the East China Sea.  The primary impetus for this ADIZ is the ongoing dispute between China and Japan over ownership of the uninhabited Senkaku (Diaoyu) Islands located further south, but the Chinese ADIZ extends coverage to Socotra Rock.  South Korea has subsequently announced its own ADIZ, which includes the area around Socotra Rock.  These conflicting claims cannot help but heighten regional tensions.