Carrier of the bubonic plague 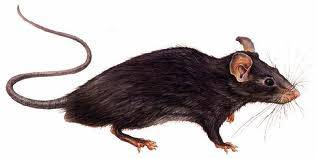 The ship rat is an alternative name for the black rat (Rattus rattus), a common long-tailed rodent.  It originated in tropical Asia, reaching the Near East in about the first century before the Common Era, probably on the coattails of Alexander the Great, whose armies reached India in 326 BC.  Armies of the Roman Empire spread the black rat throughout Europe by the beginning of the second century.  Rats are able to sustain a number of infectious bacteria without quickly succumbing.  The most dangerous and infamous bacteria hosted by the black rat is Yersinia pestis, the cause of the bubonic plague.  The plague struck Constantinople and the Byzantine Empire in 541-542, killing approximately 25% of the empire’s population.  The bubonic plague in humans is not directly caused by the rat.  Rather, fleas bite the rats, extracting some of the infected blood.  The fleas then bite humans, transferring the bacteria to a new and unprotected host.  The plague returned on a regular basis but with slowly decreasing virulence, over the next 200 years – and then almost disappeared from Europe.  The bacteria returned with a vengeance in the 1300’s in what is now called the Black Death.  Between 1348 and 1350, it is estimated to have killed up to 50% of the population of Europe.  The vector was unchanged – rats to fleas to humans.  Thereafter, fewer humans, along with better sanitation and rat control, greatly reduced the incidence of the bubonic plague in Europe, although it has never been eliminated.  The 1400’s began the Age of European Exploration.  European ships began sailing to all parts of the world – some well-known, like Africa and India.  Others, like South and North America, Australia, and New Zealand, were totally unknown to Europeans.  The ships bringing the European explorers also brought unmanifested cargo, including the black rat.  The black rat (or ship rat) had little competition in these new environments.  They thrived.  In some areas, such as Europe and most of North America, the black rat has been largely displaced by the larger brown (or Norwegian) rat.  In other areas, though, such as Australia and New Zealand, the black (or ship) rat is still dominant.