A strategic naval port on the Black Sea 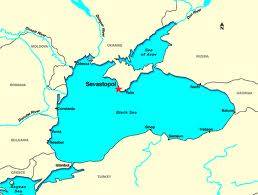 With a population of approximately 345,000, Sevastopol is the second largest port in Ukraine after Odessa.  It is situated on the Black Sea in the southwestern portion of the Crimean Peninsula.  By European standards, the city is relatively new, being founded in June 1783 as the base for a squadron of the Russian Imperial Navy.  It eventually became the home of the Soviet (now the Russian) Black Sea Fleet.  Until 1954, Sevastopol and the entire Crimean Peninsula were parts of the Russian SFSR.  In that year, Nikita Khrushchev (himself a Ukrainian) transferred them to the Ukrainian SFSR.  Crimea is officially the Autonomous Republic of Crimea (the only such entity within Ukraine).  Sevastopol is a city with special status (also the only such entity within Ukraine).  The port of Sevastopol has been the home of both the Russian Black Sea Fleet and the Ukrainian Navy since the 1990 breakup of the Soviet Union.  The Ukrainian Navy consists of units previously part of the Black Sea Fleet.  Under a 1997 agreement, Russia has a long-term lease of land and facilities in Sevastopol and the Crimea, making annual payments to the Ukrainian Government.  Sevastopol is Russia’s only warm-water naval port in Europe.  The vast majority of residents of Sevastopol and the Crimean Peninsula are ethnic Russians and speak Russian as their first language.  Despite an agreement recognizing the sovereignty of Ukraine over Sevastopol and the Crimean Peninsula, the Russian Parliament in 1993 passed a resolution declaring Sevastopol to be a federal Russian city.   In February 2014, Ukrainian President Viktor Yanukovych (an ethnic Russian Pole) lost the confidence of the Ukrainian public and fled to Russia.  An interim government was installed in Ukraine which favored closer ties with the European Union.  On 1 March 2014, the Russian parliament authorized President Vladimir Putin to deploy troops to Ukraine to protect ethnic Russians.  Russian troops promptly occupied most of the Crimean Peninsula and Sevastopol, with the vocal support of most local residents.  On 18 March 2014, the short-lived Republic of Crimea (which included Sevastopol) was incorporated into the Russian Federation.  Sevastopol has been designated a Federal City of Russia (the only two other such Federal Cities are Moscow and St. Petersburg).  Russian military forces have occupied Ukrainian military bases in Crimea and Sevastopol and have taken control of most Ukrainian Navy vessels based in Sevastopol.  None of the recent actions of Russia in or with regard to Crimea and Sevastopol are recognized by any foreign government.  Economic sanctions have been imposed on Russia as a result of these actions.