A versatile and ubiquitous resident of marine waters 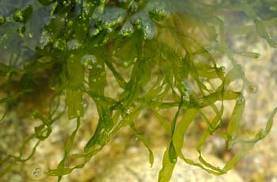 Seaweed is not a true plant; rather it is a generic term for macroscopic, multicellular benthic marine algae.  Scientists tend to classify seaweed by color, with the primary groups being red, green, and brown.  Some blue green algae are often categorized as seaweed.  Structurally, seaweed superficially resembles terrestrial plants.  The lamina is a flattened structure similar to the familiar leaf.  The stipe looks like a stem.  The holdfast is a specialized basal structure where the seaweed meets the object to which it attaches (generally a rock).  The haptera are finger-like structures extending from the holdfast and anchoring the holdfast to the substrate, similar to the roots on a plant.  The two necessary conditions for seaweed are salty water and sunlight.  With one exception, seaweed also requires a hard attachment point.  The most common attachment points are rocks, but shells, piers, docks, and marine structures such as ships and offshore platforms also serve the purpose.  Sand and mud lack the capability for seaweed attachment.  The exception to the requirement for a benthic attachment consists of fully planktonic seaweeds, such as Sargassum, which are free-floating and utilize gas-filled sacs to remain afloat or minimally submerged.  Seaweed has a variety of commercial uses and is harvested by many maritime communities.  It is a traditional food in many Asian countries, with consumption increasing in other nations based on its reputation as a health food.  Processed seaweed is also a common food additive in the form of agar or carrageenan.  Alginates are used in medicine as a component in wound dressings and in production of dental molds.  Agar is commonly used as a culture medium in biological research.  Seaweed is used as fertilizer in many coastal areas and as compost.  It is a common ingredient in toothpaste, cosmetics, and paints, as well as various industrial products.  On the downside, rotting seaweed produces hydrogen sulfide.  It has been implicated in several cases of hydrogen sulfide poisoning and several years ago a large container of seaweed exploded in a French coastal community, injuring a worker.