It has been a wild ride, these past three weeks. I suppose that’s true no matter which side of the political equation that you reside. The flurry of executive orders on a wide variety of topics and issues has delighted some, and enraged a similar number of others. Perhaps like no other, the President’s executive order banning travel from seven Muslim-majority countries and the suspension of a refugee program has been a lightning rod for controversy within these United States. As that spat winds its way through the federal court system, however, I found myself looking at the issue from a different perspective. That’s because merchant seafarers from many more countries are routinely denied shore leave here in the United States.

That reality has been going on for much longer than you would think, and has absolutely nothing to do with the latest U.S. restrictions on entry and travel by foreign nationals imposed (and subsequently blocked by the courts) by the current executive branch. And, you might think it is an oranges-to-apples discussion, but you’d be wrong. As an organization that does a lot of good for mariners everywhere, no one watches this metric closer than the Seamen’s Church Institute (SCI) and their Center for Seafarers’ Rights. For example, SCI conducted its fifteenth annual Seafarer Shore Leave Survey during the week of May 1-7, 2016.

It works like this: during the survey week, North American Maritime Ministry Association (NAMMA) member organizations and other port ministries in 29 United States ports visited 475 vessels at 203 terminals. According to SCI, the vessels visited had 10,283 crewmembers on board representing approximately 55 nationalities. Chaplains reported that a total of 1,061 seafarers (10.3%) on 104 ships were denied shore leave. An overwhelming majority (81.6%) of these seafarers were denied shore leave because they did not have valid visas. Other reasons for denial of shore leave included seafarers who remained on their vessels in United States waters for more than 29 days (11.7%), seafarers who entered the United States on C-1 Transit Visas and were detained on board after joining the vessel (2.5%), Customs and Border Protection (CBP) restrictions (2%), and vessel operations (1.9%).

Let’s be clear: SCI didn’t offer an opinion on the President’s travel ban policy and I didn’t ask them for one. And, I haven’t given mine, either. Their (SCI) focus is the fair treatment of mariners everywhere. Moreover, their data is available to anyone who wants to see it. Extrapolated out over the course of a calendar year, it is easy to see that mariners denied shore leave access in U.S. Ports number into the tens of thousands, and the reasons for doing so remain quite flimsy. Despite the attention given this issue by SCI and many other stakeholder organizations, there is little attention given to the practice here in the United States, and still less in the way of “moral outrage” by the general public. But, deny entry by persons from a handful of countries in a politically charged debate, and you would think the world was about to come to an end.

Also according to SCI, the Convention on Facilitation of International Maritime Traffic (FAL) prohibits countries from requiring seafarers to have a visa for shore leave. Although the United States has ratified the FAL, it still requires crewmembers on merchant ships to have a visa before being allowed off their vessels. Moreover, ratification of the International Labour Organization’s (ILO) Seafarer’s Identity Documents Convention (Revised), 2003 (ILO-185) would both enhance maritime security and increase seafarers’ shore leave opportunities in the United States. SCI continues, “The Convention enhances maritime security by setting international standards for seafarer identification documents that provide reliable, positively verifiable and internationally acceptable seafarer identification. Countries that have ratified ILO-185 are obligated to accept valid ILO-185 seafarers’ identification documents in place of visas for the purposes of shore leave. The United States could comply with ILO-185 by waiving visa requirements for seafarers who have valid ILO-185 seafarer identity documents.”

As a common denominator, the travel ban and the practice of denying seafarers the right to get ashore for a few minutes in the middle of a six-month (or longer) hitch on board a merchant vessel are both (arguably) about just one thing: vetting. Proponents of a travel ban point to the utter lack of information available about refugees from regions which aren’t exactly known for their stellar recordkeeping. Separately, the policy of keeping seafarers sequestered aboard merchant vessels is still likely rooted, in part, in the post-9/11 fears of terrorism within critical U.S. ports and infrastructure. But, in the case of merchant mariners, that policy is a little bit misplaced. And, if it is still okay to admit travelers, immigrants and refugees from these seven impacted countries (as I write this, that is still the case), then it should be more than okay to let seafarers – who have already gone through far more vetting than you can imagine – come ashore to buy a tube of toothpaste.

SCI also points out that effective security could be maintained through the existing 96-hour pre-arrival crewmember vetting process and the seafarers’ identity could be verified with ILO-185 seafarers’ identity documents, supplemented by implementing the US-VISIT program in American seaports. Beyond this, says SCI, CBP treats crewmembers on cruise vessels differently from those on merchant vessels. Presumably, they can get ashore easier and with greater frequency. For my part, I ask: What sets these people apart from tanker personnel, or for that matter, a visitor from a certain Middle Eastern country?

Seafarer advocates have been working the authorities for a long time on the issue of shore leave rights in the United States, with limited success. Ordinarily, I’d tell you that this is because we on the waterfront do a weak job of telling our story, no matter what the issue at hand might be. But, that’s not the case here. SCI – and other seafarer advocates – do an admirable job in improving the lot of seafarer everywhere. From where I sit, however, this problem is no less important than the (other) one which today dominates the evening news. And, it has been going on for far longer.

I’m glad that I am not in charge of deciding who is ‘safe’ to let in, and who is not. That’s a tough job and one on which hinges people’s very lives. I also wouldn’t want to be that person who made a mistake in that regard. These are risk-based decisions. Beyond that, though, I’d venture to guess that an STCW-certified mariner with months (years?) of professional training and testing behind him (or her) is at least as good a bet as anyone emanating from the seven countries named in the immigration ban. And yet, no one seems to be shedding any tears on behalf of these professional mariners – the very people who work every day, 24/7, to make the intermodal supply chain work as well as it does. 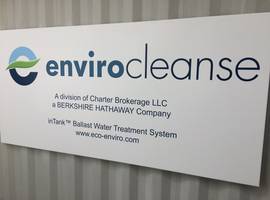