A small barrel-shaped plankton eater, sometimes mistaken for a jellyfish 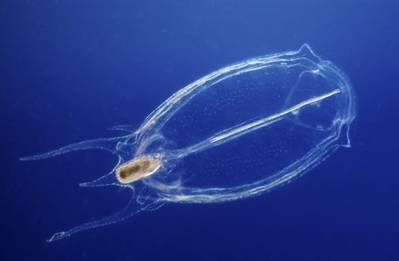 The salp is a marine animal, a member of the subphylum Tunicata.  It is a primitive member of the phylum Chordata, which includes all animals with dorsal nerve cords and notocords.  Unlike most Chordata, though, the notochord is only present during the larval stage.  As an adult, the salp is essentially brainless, making it an ideal candidate for Congress.  Like the jellyfish, the salp is a filter-feeder and propels itself by pumping the filtered sea water out with moderate force.  Unlike the jellyfish and almost all other animals, the salp has a highly complex life cycle consisting of two alternating phases.  In the solitary life phase, a single salp reproduces asexually by producing a chain of clones (up to 100 at a time).  After a short period of attachment to the parent, the clones are released into the sea as a group.  In the aggregate life phase, the chain of clones that have been released by the parent remain together, swimming and feeding as they grow in size.  Each clone in the chain reproduces sexually, having matured first as a female and then as a male.  The fertilized embryo is initially attached to the body wall of the parent.  As the embryo grows, it is released as an individual.  The released embryo then adopts the solitary life phase, starting the cycle anew.  The salp is quite numerous in the sea and, at any particular time, individuals exist at various stages of these life cycles.  The subphylum name Tunicata refers to the unique exoskeleton of the creature.  The salp’s exoskeleton is transparent and gelatinous, composed largely of a variety of cellulose called tunicin, from which the subphylum name is derived.  Unlike most exoskeletons, the salp’s is flexible and grows as the animal matures, so there is no need for periodic shedding.