A large body of water off northeast Asia 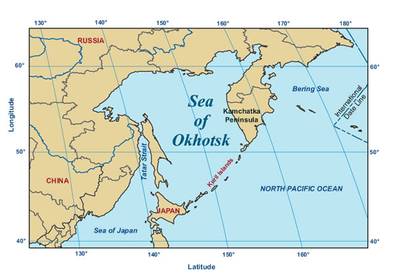 The Sea of Okhotsk is the northwestern extension of the Pacific Ocean located between northeast Asia (Russia), the Kamchatka Peninsula, the Kuril Islands, and the Japanese island of Hokkaido.  Its largest island is Sakhalin, located in the sea’s southwest portion.  The Kuril Islands are like a string of pearls running in an arc from the southern tip of the Kamchatka Peninsula to the eastern cape of Hokkaido.  The sea is large (covering 611,000 square miles and with a mean depth of 3,000 feet) and constitutes one of the most productive marine ecosystems in the world.  Its shores, particularly those of the islands, are home to numerous seabirds, including murres, puffins, auklets, and Steller’s sea eagle, the world’s largest raptor.  Marine mammals, including the Steller sea lion, the northern fur seal, porpoise, and a variety of whales, are found in its waters.  During the nineteenth century, the Sea of Okhotsk was frequented by hundreds of whaling vessels, particularly those from New England.  Fish common to the Sea of Okhotsk include capelin, cod, flounder, herring, pollock, salmon, squid, shrimp, crayfish, mussels, crab, and sea urchin.   Oil and gas discoveries, primarily in waters off Sakhalin Island, have led to construction of a number of offshore structures, with associated support vessels and facilities.  Under the influence of Siberian and Arctic weather, the Sea of Okhotsk freezes over much of its surface for up to six months each winter and spring.  The ice can be very thick, with ridges that are difficult to penetrate.  Ice floes sometimes are found off Sakhalin in June.  During the Cold War, the Sea of Okhotsk was the scene of several successful operations by US Navy submarines to tap Soviet undersea communications cables.  In 1983, Korean Air flight 007 crashed into the Sea of Okhotsk after being struck by a Soviet air-to-air missile, killing all on board.  The US Coast Guard cutter Munro (WHEC 724) was the only non-Soviet vessel allowed to take part in the search and recovery mission following that tragic incident.