A small benthic fish with a big head 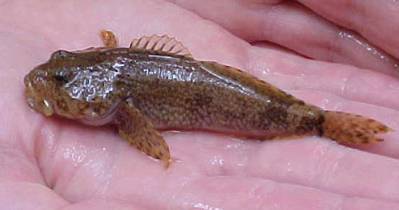 Sculpin is a small benthic fish found in marine and fresh water in the northern hemisphere.  It tolerates cold water (barely above freezing), making it common in the high north.  Its usual habitat is intertidal and tidal areas, shallow reefs, estuaries, and kelp forests.  Sculpin flesh is not favored in most human diets, so it is not targeted as a food fish, but is sought as a bait fish and for use in fish meal and fertilizer.  Most sculpin are 4-5 inches in length, but some species may grow to three feet.  Life expectancy is 3-7 years.  Color is variable – green, brown, reddish, with mottled stripes and bars.  It has a relatively big and wide head, with bulging eyes.  The fan-shaped pectoral fins are comparatively large.  The lower surfaces of the pectoral fins have sharp rays, allowing the sculpin to grip the substrate and resist strong water currents.  The bottom-dwelling fish spends much of its time on the seafloor and between rocks.  It does not have scales, but is protected by small spines and prickles on its head, gill covers, and fins.  It does not have a swim bladder.  Many sculpin have fleshy tabs or flaps between the nostril openings or on the nostrils.  The mouth is lined with numerous small teeth.  The nocturnal animal feeds primarily on crabs, shrimp, worms, and smaller fish.  In turn, it is consumed by larger fish.  Sculpin tend to be territorial, except when spawning.  Males tend to guard the fertilized eggs until they hatch.  The dorsal, pelvic, and anal fins contain soft rays.