A small but important marine invertebrate 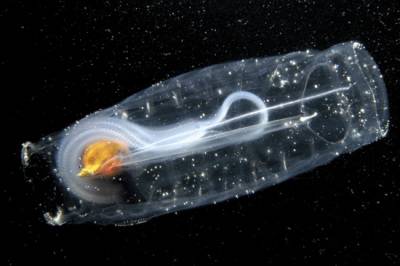 Salps are small (half-inch to four inches in length) planktonic marine invertebrate animals that are sometimes mistaken for jelly fish.  Unlike jelly fish, though, they possess notochords (primitive spinal cords) and a primitive nervous system.  They are considered to be among the most primitive extant members of the Chordata phylum and are often used in scientific research.  Salps pump water through their barrel-shaped gelatinous bodies, straining the passing water for phytoplankton.  They are found in all marine waters worldwide, particularly in those near Antarctica.  The lifecycle is complex.  During the oozoid or solitary phase, the animal reproduces asexually, producing a chain of potentially hundreds of small individual.  This chain or aggregate phase is comprised of individuals known as blastozooids.  Each blastozooid reproduces sexually (the animal being hermaphroditic at this stage, alternating between female and male).  The fertilized embryo grows into an oozoid and starts the process anew.  This lifecycle allows for rapid population growth.  Phytoplankton blooms often result in salp blooms.  Sometimes these salp blooms occur near the coast and can end up in harbors and on beaches, creating a smelly mess.  Because salp are present in large numbers and have a short lifespan, the carbon that they capture during life sinks to the ocean bottom, leading many scientists to conclude that the animal is quite beneficial to suppressing to some extent the increase in carbon dioxide levels in the atmosphere.  Salps are also a primary or secondary food source for many other marine animals, residing near the bottom of the food chain.