A practical approach to navigation 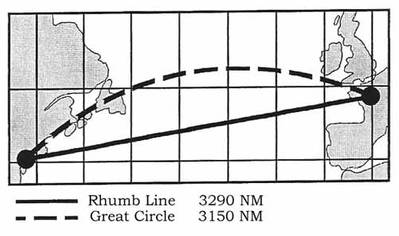 A rhumb line is a steady course or line of bearing that appears as a straight line on a Mercator projection chart.  Except in special situations, such as when traveling due north or due south or when (at the Equator) traveling due east or due west, sailing a rhumb line is not the shortest distance between two points on the surface of the earth.  A more technical definition of the rhumb line is a line on the surface of the earth making the same oblique angle with all meridians.  Mathematically, it is referred to as a loxodrome, from the Greek term for running at an inclined angle.  The shortest distance between two points on the surface of a sphere such as the earth is a great circle.  The problem for navigation is that sailing a true great circle would require constant changes in the course steered.  In most cases, for voyages of short distance, the difference in length between a great circle route and a rhumb line route is minimal.  At high latitudes or for long voyages, the differences can be large.  In those cases, the navigator generally breaks the great circle route into a series of short rhumb line courses so that the helmsman can be given a fixed course to steer for several hours or so.  Interestingly, any rhumb line course other than due east or due west will eventually take the navigator to the pole (north or south, your choice) if practicalities such as fuel and land masses are discounted.  Rhumb Line is also a popular name for taverns in seaports.