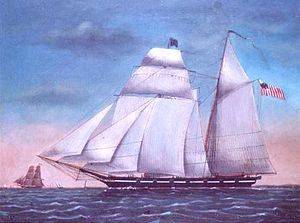 The US Revenue Cutter Ingham was launched in 1832 as part of the Morris-Taney class.  The cutters were designed for multiple missions including, but not limited to, law enforcement, fighting pirates (which were particularly prevalent in the Gulf of Mexico and around Cuba), and augmenting the US Navy.  It had a schooner rig and Baltimore Clipper lines, making it especially fast.  It carried a crew of 22 and was armed with four or more six-pounder muzzle-loading cannons.  Stationed in New Orleans, it was commanded by Captain James Nicholson and later by Captain Ezekiel Jones.  After several years of chasing pirates and enforcing revenue laws, Ingham (Captain Jones commanding) was dispatched to the coast of Texas.  Relations between the Mexican Government and the Americans living in the territory of Texas were severely frayed.  The primary trade route for Texas was via ship to and from New Orleans.  Formalities of Mexican customs laws were not always honored by these traders.  Mexican Navy ships seized some Texas and US-owned vessels.  The Mexican Navy schooner Montezuma seized the US-flag vessel Martha on 7 May 1835 and held the US crew as prisoners on board.  Ingham located Montezuma near Brazos Santiago (just north of the mouth of the Rio Grande) on 14 June 1835.  Montezuma opened fire.  Ingham returned fire with vigor and good marksmanship, considering the poor accuracy of the cannons.  Montezuma grounded while attempting to evade further action.  This exchange of cannon fire is considered by some to be the opening shots of the Texas Revolution, which formally began in October 1835.  On 15 June 1835, Mexican General Martin Cos ordered the release of the US citizens that had been taken prisoner off the Martha.  Ingham and Captain Jones returned with the freed US citizens to a hero’s welcome in New Orleans.  The local newspaper wrote “the vessel [Ingham] is entitled to bear the best motto for a military public servant – SEMPER PARATUS”.  The Revenue Cutter Service later adopted the term as its motto, and that has been carried forward by the US Coast Guard.  As an indication of where US sympathies lay as the Texas Revolution developed, the US Government sold Ingham on 10 January 1836.  It was immediately renamed Independence and became the first warship of the Texas Navy.