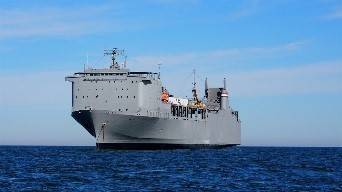 Merchant mariner numbers may be at a low in the U.S., but the men and women of the Ready Reserve Force (RRF) have increased their operating days by 245 percent from Fiscal Year (FY) 2016 to FY 2017.
This year’s missions have included some of the largest ammunition movements since the Vietnam War – which the RRF crane ships are exceptionally cut out for; unit resupply to various theaters around the world, and movement of rotating forces including supporting the Canadian military. The Aviation Maintenance Ship SS Wright even received flight deck certification for the MV-22 Osprey aircraft – further increasing its capability and capacity to support the Department of Defense.
To sum up – in fiscal Year 2017 there were about 345 operating days (days away from layberth) for RRF vessels on cargo missions, exercises, and FEMA mission assignments.  In 2016 there were around 100 operating days for RRF vessels on missions and exercises. 2018 is on track to match, if not surpass, 2017.
From 2002 to June of 2008, 118 ship activations were called for in support of Operations ENDURING FREEDOM and IRAQI FREEDOM. In that period, there were 13,575 ship operating days with a reliability rate of 99 percent. Almost 25 percent of the initial equipment needed to support the U.S. Armed Forces operations in Iraq was moved by the RRF. By comparison, Military Sealift Command’s combined sealift fleet of Large, Medium-Speed Roll-on/Roll-off (RO/RO) and Fast Sealift Ships carried 29 percent of the cargo required for the invasion.
The RRF provides significant cost savings to the Department of Defense by maintaining shipping capacity in a reduced operating status until needed. These vessels also provide maximum flexibility to an already thinly-stretched Navy. In 2014, the RRF vessel Cape Ray was converted into a floating Incinerator for the safe destruction of the most dangerous chemical warfare materials in Syria’s declared chemical weapons arsenal. The historic mission supported the Defense Threat Reduction Agency (DTRA) in neutralizing almost 600 tons of declared chemical weapons, and that same vessel is still active today, carrying military cargo and supporting a U.S. Army Logistics-Over-the-Shore (LOTS) exercise overseas.
In the same year as Cape Ray’s DTRA mission, the Cape Rise and Cape Wrath were deployed to support the global effort to end the Ebola virus disease outbreak in West Africa.
The RRF program was initiated in 1976 as a subset of the Maritime Administration’s (MARAD) National Defense Reserve Fleet (NDRF) to support the rapid worldwide deployment of U.S. military forces.
The NDRF consists primarily of RO/RO vessels with some tankers and military auxiliaries set aside for national defense and national emergencies. Of the nearly 100 vessels in the NDRF, forty-six ships are assigned to the RRF and kept in an increased readiness state with a small crew to be activated in short order.
Generally, RRF ships must be ready to load military cargo for transport to areas of operation within five days of activation. Operated under contract by commercial U.S. ship managers, these vessels form three-quarters of the Government’s surge sealift capacity, and are crewed by volunteer, contract, U.S. mariners.
The majority of the RRF ships are RO/RO vessels that are uniquely built for the movement of vehicles, tanks and rolling stock. The RRF also boasts six auxiliary craneships, and two aviation repair vessels. These ocean-going ships provide the initial surge of military capability that rapidly delivers military equipment and supplies during major contingencies.
In addition, MARAD also manages NDRF vessels used to train merchant mariners and respond to natural disasters. These Training Ships (TS) are located at each of the six state maritime schools and one at the United States Merchant Marine Academy. Most recently, RRF and NDRF ships were activated to support relief activities following Hurricanes Harvey, Irma and Maria. During these deployments MARAD vessels delivered supplies, and provided citizens and first responders with housing, meals, logistical support, and relief supplies.
While our crews work hard to keep the RRF fleet ready, that task is becoming increasingly challenging and costly for ships with an average age of 43 years – well past the prime for most commercial vessels. MARAD is working closely with the Navy, U.S. Transportation Command, and Congress to recapitalize and replace these critical assets to our national defense.