A visible warning to stay clear. 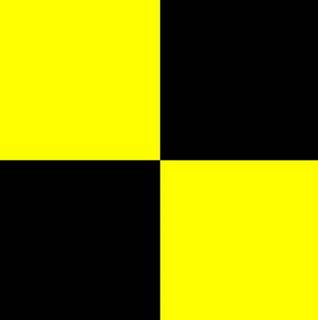 The quarantine flag, also called the “Yellow Jack”, is the international signal flag LIMA.  It is square in shape.  Its display is divided into four smaller squares, with two on top and two on the bottom.  The smaller squares are alternately yellow and black in color.  The flag is flown from a ship that is either arriving in port with known serious health problems or that has been placed under quarantine by the local port authorities.  Once the local authorities have determined that the ship’s health problems have been resolved and removed the quarantine order, the ship may fly the free pratique flag (e.g., the international signal flag QUEBEC), which is solid yellow.  The concept of quarantine is ancient and is mentioned in the Old Testament.  The term itself is derived from the practice of the city-state of Venice during the Middle Ages of requiring ships arriving from locations known to being experiencing diseases such as the plague to anchor or moor off the port for 40 days (quaranta giorni) so that any disease on board might run its course.  The practice of quarantine has varied over the centuries, but the concept of protecting the public health by restricting the movements of individuals who are suspected of possibly harboring serious disease has remained constant.  The World Health Organization (WHO) provides guidelines on how and when quarantine should be used, but its actual implementation is left to the discretion of individual nations.  In the United States, the Center for Disease Control and Prevention (CDC) administers the federal quarantine program, but the separate states and local communities also have broad powers.  Ships arriving in a US port with serious disease on board are required to provide advance notification.  The ship may be required to undertake certain sanitary measures and to exercise various controls over all persons on board to prevent them from serving as disease vectors potentially infecting the local populace.  The closest we have come recently to a general quarantine affecting the maritime industry was during the 2002 SARS epidemic, which heavily impacted southeast Asia.  A future pandemic, whether the result of avian flu or otherwise, may see widespread implementation of quarantine measures and flying of the quarantine flag.