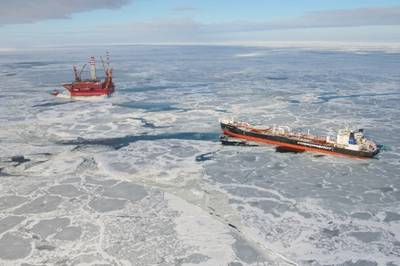 The Prirazlomnaya offshore oil platform is located in the Pechora Sea (the eastern portion of the Barents Sea) south of Novaya Zemlya and bordered on the east by the Kara Strait.  It is the world’s first Arctic-class ice-resistant offshore oil platform in the world.  It pumps crude oil from the Prirazomnoye field, which has estimated reserves of 610 million barrels.  The field was initially developed in 1993 by Rosshelf and is now operated by Gazprom Neft.  Early plans called for produced oil to be transported by the double-acting shuttle tankers Mikhail Ulyanov and Kirill Lavrov to the floating storage and offloading (FSO) vessel Belokamenka located in Kola Bay near Murmansk.  As of now, though, the crude oil (referred to as ARCO crude) is being delivered directly to European refineries by the ice-breaking shuttle tankers.  During 2014, there have been three such shipments totaling approximately 200,000 tons, wit the possibility of a fourth shipment before the new year.  The Prirazlomnaya platform has been controversial from the beginning, as offshore oil drilling in polar waters presents unique risks and unprecedented challenges.  In 2012, shortly after the platform reached its planned location, Greenpeace activists boarded and placed a banner stating “Don’t kill the Arctic”.  On 18 September 2013, the Greenpeace ship Arctic Sunrise tried to place three of its personnel onto the platform.  The Russian Maritime Border Guard (sometimes referred to as the Russian Coast Guard) seized control of the Arctic Sunrise and its crew of 28, along with two journalists.  The Greenpeace ship was towed to Murmansk.  The so-called Greenpeace 30 were initially charged with piracy, but later the charges were reduced to hooliganism.  They were released by order of President Putin in December 2013 as part of a general amnesty.  Following a protest by the Government of the Netherlands, where the Arctic Sunrise was registered, the ship was released from arrest and returned.  To date, there have been no reported oil spills from the Prirazlomnaya platform, but it is still in the early stages of production.  Plans call for completion of an absorption well and drilling of several more development wells during 2015.  Export of oil from the platform highlights the severe lack of infrastructure in the Arctic, particularly the lack of oil spill response capability.