The self-proclaimed micro-nation off the east coast of England 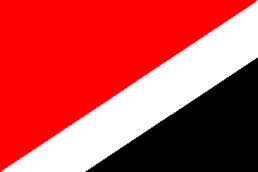 During World War II, British defense forces built a series of structures off the east coast of England to defend against attacks by low-flying German aircraft.  There were Army and Navy versions of the so-called Maunsell Forts,.  The Navy version consisted of a large floating rectangular pontoon with hollow towers near each end.  A military-grade platform and concrete bunker connected the two towers.  The pontoons were flooded and sunk to the seafloor in the North Sea three to five miles off the English coast.  One of those structures, called HM Fort Roughs, was placed four nautical miles off the Felixstowe.  It was manned by military personnel until 1956 (eleven years after hostilities with Germany had ceased).  In the mid-1960’s, a pirate radio station commenced broadcasting from the structure.  The British Government took no particular action to shut down the broadcasts, in part because the structure was located just outside Britain’s then-claimed three nautical mile territorial sea.  On 2 September 1967, Paddy Roy Bates ejected the first group and set up his own broadcasting operation, called Radio Essex.  In 1968, when workers attempted to service a navigational buoy near the structure, Michael Bates (Paddy’s son) fired warning shots.  He was hauled into court, but the court ruled that structure was outside British jurisdiction.  In 1975, Paddy drafted a constitution for what he proclaimed as the Principality of Sealand, an independent nation of 0.025 square kilometers and a claimed population of 50 persons.  Paddy also had a flag and a coat of arms designed.  He died in 2012 and the operation is now administered by his son Michael, who calls himself Regent.  The Principality sells aristocratic titles via the internet starting at £29.99.  It also issues coins and postage stamps and operates an offshore internet hosting facility.