A small Mediterranean island with a rocky history 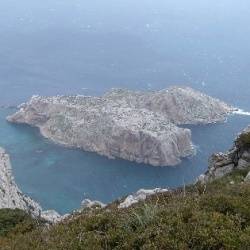 Perejil is a small (0.25 square mile) island in the western portion of the Mediterranean Sea, 600 feet off the coast of Morocco.  It has no permanent human population.  It is barren and rocky, with sparse vegetation and minimal fresh water.  Locals on the mainland sometimes bring goats to the island to graze.  In other words, it has no measurable economic value.  Its only value lies in its history and competing national pride.  In 1415 (500 years ago), Portugal went on the offensive against Muslim invaders.  As part of its ultimately successful plan to establish a foothold in North Africa at Ceuta, its forces assembled at and offshore of Perejil Island, five miles to the east and undefended.  Thereafter, Portugal maintained its claim to Perejil, even though all of its forces were soon withdrawn.  In 1580, Portugal temporarily joined the Kingdom of Spain.  When Portugal regained its independence, sovereignty over Ceuta and Perejil was retained by Spain.  The Kingdom of Morocco has for many years disputed Spain’s claim to Ceuta and Perejil.  On 11 July 2002, a group of Moroccan soldiers established a base on Perejil (sounds like the Falklands/Malvinas).  Soon, a Spanish Civil Guard patrol boat, on routine patrol from its base at Ceuta, noticed the Moroccan flag flying from the island.  When the Civil Guard personnel landed on the island, they were met by armed Moroccan troops who forced them to return to their patrol boat.  The Spanish government lodged an immediate protest.  The Moroccan government asserted that the soldiers were on the island to thwart illegal immigration and drug smuggling.  Regardless, the soldiers were removed and replaced with Moroccan naval cadets, who set up a more permanent base.  On 18 July 2002, Spanish commandos, supported by the Spanish Navy and Air Force, descended on the island and quickly took the Moroccan cadets into custody.  The cadets were flown by helicopter to Ceuta and then turned over to Moroccan border guards.  The Moroccan government and people were incensed.  Active conflict was being considered.  The US government offer of mediation was accepted and Secretary of State Colin Powell negotiated an arrangement to return to the status quo ante, where all forces were withdrawn and both sides continued their assertions of sovereignty over the rocky island.  Nothing has changed since.