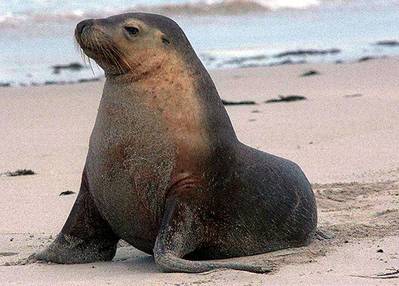 The northern fur sea is an eared seal that resides in waters of the North Pacific Ocean, the Sea of Okhotsk, and the Bering Sea.  Adult males are generally about six feet in length and weigh over 500 pounds, while adult females are four feet long and weigh about 120 pounds.  The fur of the northern fur seal is particularly thick and luxuriant.  Indigenous peoples have hunted the northern fur seal for thousands of years, both for their fur pelts and as a source of food.  In 1786, the Russian explorer Gavriil Pribylov was the first European to reach what are now called the Pribilof Islands in the Bering Sea.  The Pribilof Islands, now part of the State of Alaska, are the major rookery of the northern fur sea.  Russian hunters killed an estimated two million fur seals between 1786 and 1867 (when Russia sold Alaska to the United States).  On July 27, 1868, Congress adopted an act to extend the laws of the United States to the new territory.  A section of that law made it a crime to kill any fur seal or other fur-bearing animal within Alaska or in the waters thereof.  Any vessel involved in an offense was subject to forfeiture.  The Secretary of the Treasury was empowered to issue licenses authorizing the taking of fur seals.  The Secretary immediately dispatched the Revenue Cutter RUSH to patrol Alaska waters and particularly to enforce the prohibition on the unauthorized killing of fur seals.  Illegal killing of northern fur seals had started shortly after 1786 and was not about to end just because jurisdiction over the islands had changed.  The sealers knew that federal enforcement resources were limited and that the one Revenue Cutter assigned could only patrol the Bering Sea for a short summer season.  The word among sealers was: “Come early and avoid the RUSH!”  By 1911, the population of northern fur seals had been reduced from millions to less than 300,000.  That year, the nations of Great Britain (on behalf of Canada), Japan, Russia, and the United States ratified the Northern Fur Sea Convention.  The treaty banned the pelagic hunting of fur seals and granted the United States jurisdiction to manage on-shore hunts.  This was the first international agreement for wildlife conservation.  The US Coast Guard continues to patrol the Bering Sea, enforcing laws protecting the northern fur seal and the population is now estimated at about one million.