The hybrid remotely operated submersible crushed in the Kermadec Trench 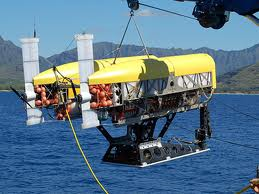 The Nereus was the most capable research submersible in the world.  Built in 2008 by the Deep Submergence Lab at the Woods Hole Oceanographic Institute (WHOI), it was named after the Greek sea titan of the same name.  The mythological god had a man’s head and body and a fish’s tail.  The submersible was also a hybrid: it could operate autonomously to survey large areas of the ocean floor or it could operate in a thin tether to do precise analysis of small areas and recover objects and samples from the sea floor.  It could and did explore the deepest parts of the ocean, diving to the bottom of the Challenger Deep in the Marianas Trench (10,902 meters or 35,768 feet below sea level) on May 31, 2009.  Only the manned submersible Trieste in 1960 and the Japanese submersible Kaiko in 1995 had ever achieved this feat.  Nereus had also explored the world’s deepest known hydrothermal vents along the Cayman Rise in the Caribbean Sea.  Weighing approximately three tons, Nereus consisted of two four-meter long cylinders largely filled with precisely engineered ceramic spheres for floatation.  It also carried 2,000 lithium-ion batteries for power.  When operated as a remotely controlled vehicle (ROV), contact with the surface vessel was maintained via a slender glass fiber cable with a full length of 40 kilometers.  In April and May 2014, Nereus was engaged in the first systematic study of the Kermadec Trench in the South Pacific Ocean northeast of New Zealand.  Thirty days into a planned 40-day mission and seven hours into a planned nine-hour dive, contact with Nereus was suddenly lost by technicians on the support vessel Thomas G. Thompson.  Debris from Nereus was later recovered on the surface.  Analysis revealed that Nereus had suffered a catastrophic implosion resulting from the high pressures of the 9,900 meter depth at which it was operating.