Posted to Maritime Musings (byDennis Bryant) on May 14, 2013 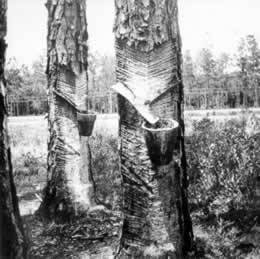 Originally, the term naval stores referred to anything and everything used in the construction and maintenance of ships.  Gradually though, the term narrowed to mean tar, pitch, turpentine, rosin, and similar products used to keep wooden ships watertight and to reduce wear and tear.  All of these products are (or at least originally were) derived from pine sap.  Pitch and tar were mixed with fibers like hemp to caulk the spaces between planks in the hull and deck to prevent leakage.  These products could also be applied to lines and sails to reduce chaffing.  By the seventeenth century, Western European nations such as Britain, the Netherlands, France, and Spain had exhausted their indigenous sources for naval stores.  Imports from Sweden and Russia were becoming prohibitively expensive.  Britain and, to a lesser extent Spain, turned to their colonies in North America to take up the slack.  The extensive pine forests extending from Virginia to Florida proved to be excellent sources of naval stores.  In 1720, the Britain adopted a program to support the Royal Navy and its merchant marine that paid a bounty for naval stores acquired in its North American colonies.  In North Carolina, South Carolina, and Georgia, production of naval stores became widespread.  The work, though, was labor intensive and most was performed by slaves.  The methodology resembled that used on rubber plantations or in groves of sugar maple.  The pine tree would be deeply gashed at an angle.  The oozing sap would be collected in small cups and eventually emptied into barrels.  The collected sap then would be distilled.  As the business grew, large operators, known as factors, controlled huge tracts of forests.  Savannah, Georgia became the major center for the export of naval stores.  That trade is memorialized today in the “Factors Walk” area of historic Old Town on the riverfront.  As wooden ships were replaced by iron and steel ones, the naval stores industry faded, but never disappeared.  Alternative uses for these products are now at the fore.  Turpentine is used today as a solvent and in medicines, fragrances, and flavoring.  Rosin is used in paper sizing, surface coatings, adhesives, inks, rubber compounds, and by baseball players, few of whom realize its connection to the Royal Navy of yore.