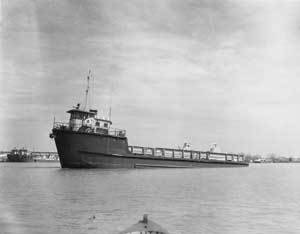 Offshore drilling for oil and gas began tentatively shortly after the end of World War II with work off piers in California.  By 1947, drilling was begun in waters of the Gulf of Mexico over 40 miles off the coast of Louisiana.  Initially, fishing vessels, small freighters, and surplus amphibious assault craft were utilized to supply and support these efforts.  In 1955, Alden J. “Doc” Laborde realized that these vessels were inadequate to meet the growing need of the offshore drilling industry.  Assembling a group of investors, he designed and had constructed the first purpose-built offshore supply vessel, Ebb Tide.  It entered service in 1956 for the newly formed Tidewater Company and proved its worth immediately.  It employed two powerful engines, allowing it to get out to rigs quickly.  The bridge was located very far forward, with a long open, flat deck aft.  This allowed for loading and handling of numerous lengths of drilling pipe, a task that had challenged previous vessels used for this work.  Construction of offshore supply vessels on the model of Ebb Tide followed immediately.  Variations on the basic design led to crew boats and lift boats, among other things.  While the United States was the leader in OSV construction and utilization, the concept soon spread worldwide.  Initially, the US Coast Guard regulated OSVs as small cargo vessels or small passenger vessels, but in 1980, Congress established OSVs as a separate class of commercial vessels.  Soon thereafter, the Coast Guard promulgated Subchapter L of Title 46, Code of Federal Regulations, providing for a set of construction, maintenance, and operations regulations specifically intended to OSVs.  The International Maritime Organization (IMO) has done likewise.  Not a bad legacy for the modest Ebb Tide.