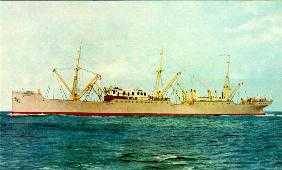 The motor ship (MS) SELANDIA was a twin screw ship launched in Copenhagen in 1911 from the Burmeister & Wain Shipyard.  It entered service for the East Asiatic Company on February 22, 1912, when it commenced a voyage from Copenhagen to Bangkok via Genoa.  With a length of 370 feet and a 53-foot beam, its tonnage was 6,800 dwt and 4964 gt.  It had twenty first-class cabins for passengers and was equipped with toilets and baths, along with servants’ rooms.  The Selandia’s two 1,250 horsepower engines provided a cruising speed of twelve knots.  Uniquely, it was designed without a funnel; instead, discharging smoke through its foremast.  A small diesel engine had been used to propel a canal boat in 1903.  Larger diesel-powered boats were built in Russia in succeeding years, used mostly on the Volga River.  In 1910, the diesel-powered oil tanker Vulcanus was built in the Netherlands, but excited little attention.  The entry of the Selandia changed the landscape.  It proved the practicality of diesel engines on large ships and signaled the end of the steamship era.  Suddenly, many ship owners wanted diesel-powered ships.  While steamships continued to be built in large numbers into the middle of the 20th century, the use of diesel engines on ocean-going ships was clearly on the rise and eventually became dominate.  The Selandia, though, did not survive to see the rapid evolution which it started.  In 1936, it was renamed the Norseman and flagged in Panama.  In 1940, it was sold to the Finnish America Line and renamed the Tornator.  In 1941, it was requisitioned by the Allies and used to carry troops and supplies to the Far East.  It was sunk in the Pacific in January 1942.

“Big Data” and What it Will Mean for Maritime Training: “The Art of the Possible”