A specialized vessel for drilling oil and gas wells in Arctic waters. 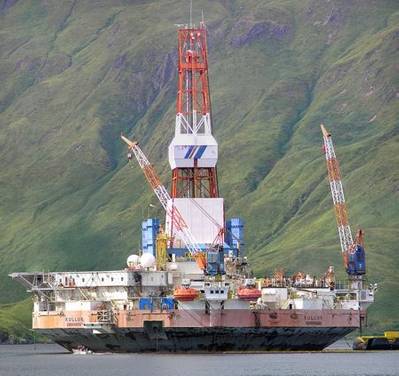 After years of relative obscurity, the mobile offshore drilling unit (MODU) Kulluk is making news.  It was built in 1982-83 by Mitsui Engineering and Shipbuilding Company Ltd in Tamano, Japan.  At the time of construction, it was the most advanced MODU for work in the Arctic, and is still among the leaders.  It is 274 feet in length, and has a beam of 227 feet and a draught of 40 feet.  It has a gross tonnage of 24,639 tons and a net tonnage of 8,390 tons.  It has an inverted, truncated, conically-shaped ice-strengthened hull, shaped somewhat like the old Wind-class icebreakers, which had a semi-circular hull so that when beset in the ice, the pressures would force the hull upward, rather than crushing it.  The Kulluk has spent virtually its entire life in the Arctic, mostly in Canadian and United States waters of the Beaufort Sea.  Initially, it was operated by Gulf Canada Resources, drilling exploratory wells in waters off the Northwest Territories and the Yukon.  For several seasons in the late 1980s and early 1990s, it was used for exploratory drilling in the Beaufort Sea off Alaska.  From 1994 until 2008, the Kulluk was laid up in McKinley Bay, northeast of Tuktoyaktuk.  At that point, it was purchased by its current owner, Shell Offshore, which has been refurbishing the Kulluk.   On April 11, 2012, the Environmental Protection Agency (EPA) issued a Clean Air Act (CAA) Outer Continental Shelf (OCS) permit to construct and a Title V air quality operating permit to Shell Offshore for operation of the Kulluk in the Camden Bay area of the Beaufort Sea off the north coast of Alaska. Previously, the Bureau of Ocean Energy Management, Regulation, and Enforcement (now the Bureau of Ocean Energy Management – BOEM) conditionally approved the Shell plan for drilling up to four shallow water exploratory wells in the Beaufort Sea.  The Kulluk and its support vessels will be staged out of Dutch Harbor, Alaska, where some of the maintenance and technical upgrades were performed.