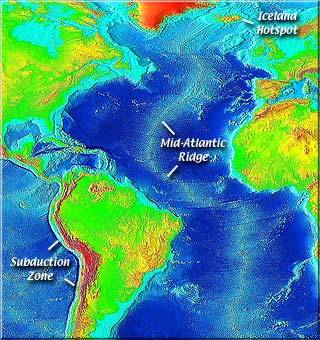 One hundred and eighty million years ago, there was no Atlantic Ocean.  North and South America were joined with Europe and Africa to form one large continent, Pangaea.  Then a fault line or crack developed running mostly north-south splitting the Americas from Europe-Africa.  Seawater flowed into the gap.  The split was the result of upwelling of magma from under the earth’s crust.  The split has widened at an average rate of one-inch (2.5 centimeters) annually.  We now refer to the gap between the continents as the Atlantic Ocean.  The center of the gap is marked by the Mid-Atlantic Ridge.  It extends from a point northeast of Greenland and down the middle of the Atlantic Ocean to the Antarctic Ocean, southwest of the southern tip of Africa – a distance of about 10,000 miles (18,000 kilometers).  It is essentially the longest mountain chain in the world, but largely beneath the sea.  It rises above the surface at Jan Mayen Island, Iceland, the Azores, Saint Peter and Paul Rocks, Ascension Island, Tristan da Cunha, Gough Island, and Bouvet Island.  The ridge has a deep rift valley at its center, marking the boundary between the adjacent tectonic plates and the point where the magma actually breaks through the seabed.  Analysis has shown that the sea floor on both sizes of the Mid-Atlantic Ridge is gradually older as one moves further from the actual ridge and that the age differences are uniform between the left and right sides of the ridge, all the way to the continental shelves on either side.  As the Atlantic Ocean widens, the Pacific Ocean narrows.  It will be many years, though, before we must prepare for a collision between North America and Asia.