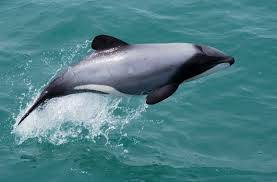 The New Zealand Department of Conservation recently expanded the existing ban on set net fishing off the west coast of the North Island by an additional 350 square kilometers in an effort to reverse the decline in numbers of Maui’s dolphin.  The Maui’s dolphin is the world’s smallest and rarest dolphin.  The adult female is about six feet in length and weighs just over 100 pounds, with the male generally being slightly smaller.  The Maui’s dolphin is found only along the west coast of New Zealand’s North Island, although historical evidence shows that it previously also resided on the Island’s east coast.  It is a subspecies of the larger Hector’s dolphin, which is found primarily in coastal waters of the South Island.  It is estimated that there are only about 55 adult Maui’s dolphins.  Other than their small size, they are most easily recognized by their rounded dorsal fins.  With gray, white, and black markings and short snouts, they generally congregate in pods of five or six.  Like other cetaceans, they use echolocation to navigate, communicate, and hunt for food.  They feed primarily on small fish, squid, and bottom-dwelling species.  Maui’s dolphins have a life expectancy of about 25 years.  Females become sexually mature at about age eight, giving birth to one calf about every three years.  They have no known predators, but are subject to disease and are sometimes entangled in fishing nets.  The Maui’s dolphin is listed in the New Zealand Threat Classification System as “Nationally Critical” – the most endangered rating.  Conservationists fear that, unless additional protection measures are adopted, Maui’s dolphin will be extinct within 20 years.

Teach your friends to dive