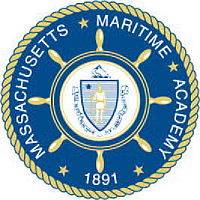 Massachusetts Maritime Academy, located at Taylor’s Point, Buzzards Bay, was established in 1891, making it the nation’s second oldest state maritime academy (after the State University of New York Maritime College).  It is a regionally accredited, coeducational four-year state college offering undergraduate degrees in maritime-related fields, as well as selected graduate degrees and continuing education.  The school was originally located onboard USS Enterprise, a barque-rigged screw sloop on loan from the US Navy and berthed at a pier in Boston.  In 1936, after changing training ships several times, the school was relocated to Hyannis as the Massachusetts Nautical School.  In 1946, the school acquired its first and present shoreside location, but permanent land-based facilities were not constructed until 1972.  Women were first admitted in 1978.  The present Regiment of Cadets has 1,400 members.  Students in the Marine Transportation and Marine Engineering curricula must sail on four Sea Terms.  The Sea Terms are voyages of approximately 52 days on board the USTS Kennedy (T-AK-5059) a former break bulk freighter launched in 1967.  Graduates from these two programs who pass a four-day professional examination administered by the US Coast Guard earn a Merchant Mariner License upon graduation as either a Third Mate or a Third Assistant Engineer.  The school, commonly referred to as Mass Maritime, also offers undergraduate degrees in Environmental Protection & Safety; Facilities Engineering; International Maritime Business; Emergency Management; and Energy Systems Engineering.  The school operates a scale model ship-handling program on a pond ten miles from the campus, providing users realistic experience in ship maneuvering.  There is also an exchange program with the Shanghai Maritime Academy, where cadets spend 100 days in Shanghai taking classes in maritime business, law, and marketing, as well as being provided an opportunity to explore China.  Cadets from the Shanghai institution also have an opportunity for similar experience at Mass Maritime.