A group of islands, reefs, and submerged banks in the southwest Indian Ocean 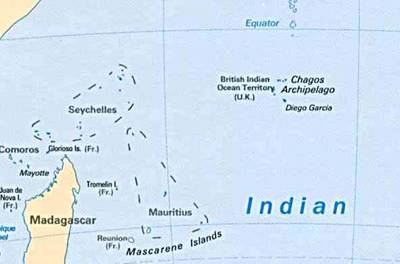 In the western Indian Ocean from east of Madagascar to the Seychelles Islands is a large area of relatively shallow water.  The ocean bottom there is referred to as the Mascarene Plateau.  Due to volcanic activity, a series of islands formed on the plateau, but only a few remain above water.  The Mascarene Islands, named for the Portuguese navigator Pedro Mascarenhas who landed there in 1507, consist of three large islands (Mauritius, Réunion, and Rodrigues), two small islands (the Agalega islands), the Cargados Carajos coral atoll group (also known as the Saint Brandon archipelago), four submerged banks (Saya de Malha, Nazareth, Soudan, and Hawkins), and a number of offshore rocks.  They were formed due to volcanic eruptions between about 35 and 10 million years ago.  The four banks, which were formed first as islands have experienced the most erosion.  Volcanoes on Mauritius and Réunion are still occasionally active.  Much of the plant and animal life on the islands is unique, reflecting the fact that they are up to 1,000 miles away from Madagascar, the nearest large land mass.  It was on these islands that the Dodo and several other flightless birds developed, along with other life forms not found elsewhere.  Some, such as the Dodo, have gone extinct and others are threatened.  The islands were first discovered by Arab sailors in the tenth century, but they did not settle there.  The island of Rodrigues, named for a Portuguese navigator, came under Dutch control in 1601.  They were replaced by the French in 1691.  Mauritius was settled by the Dutch in 1638, but replaced by the French in 1715.  Allegedly, Réunion was first occupied in 1646 by French mutineers.  In 1810, Britain took control of all three islands, but Réunion was returned to France in 1815.  It is governed by France as an overseas department.   Mauritius (together with Rodrigues, Cargados Carajos, and the Agalega islands) was granted its independence in 1968.  Luxury tourism is the major economic activity on Mauritius.  Tourism is also important on Réunion.