Marine Engineers’ Meet focuses on a responsible and vibrant role

Posted to Marine Engineers’ Meet focuses on a responsible and vibrant role (byJoseph Fonseca) on March 6, 2013

Ship building, IMO’s role on ensuring compliance of regulations by various member states and enhancement of safety through Ergonomic designs get highlighted at the Marine Engineer Annual meet 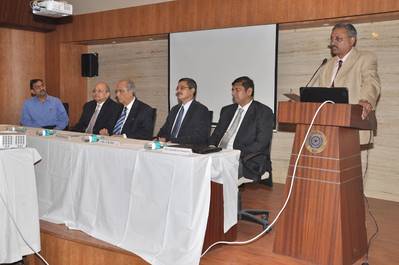 For marine engineers of Mumbai, the Annual Meet of the Institute of Marine Engineers (IME(I)) which ends with a grand banquet is a momentous event witnessing the largest turnout in the maritime sector. This year heading the schedule was the seminar providing a platform to showcase some of the highlights of the upcoming developments of the maritime field.

The focus at the Annual Meet was on three pertinent topics: 1) “IMO’s role for ensuring regulatory compliance in international shipping” which was illustrated by the former Chief Surveyor and the present Principal & Head of The Great Eastern Institute of Maritime Studies Ajoy Chatterjee; 2) The topic on “Enhancing Safety by Ergonomic Design” was presented by Sumithran Sampath of ClassNK and 3) “Indian Ship building – Past, Present and Future” by Cdr S. Navaneetha Krishnan of the Indian Navy.

Though IMO has developed binding measures to ensure that ships of all flag States meet international rules and standards, it is beyond the scope of IMO to participate in any kind of enforcement activity because it lacks both the resources and, more importantly, the mandate to do so. Therefore, a code was developed to cover the responsibilities of Member States in their roles as flag, coastal and port states. This Code, being a standard against which an IMO Member State should be audited, also contains a number of recommendatory sections. The standards are set by the mandatory IMO instruments listed under the scope of the Code.

“In all 68 Member States volunteered for audit and 88 individual auditors from 42 Member States undertook the 57 audits,” Mr Chatterjee stated. “The audit practice is not new to the shipping industry. The ISM Code and STCW Convention are audit pacesetters introduced by the IMO. Audits have been able to identify areas for improvement in all states audited.”

Based on the experience gained in the implementation of the Voluntary IMO Member State Audit Scheme, the Assembly, at its twenty-sixth session in November 2009, adopted resolution A1018(26) on the further development of the Scheme. In line with the time frame and schedule of activities for the institutionalization of the Audit Scheme, contained in resolution A.1018(26), the IMO bodies mentioned therein have been involved in the work on the further development of the Audit Scheme, which have culminated in the completion of the audit standard [IMO Instruments Implementation Code (III Code)] and draft amendments to the relevant mandatory IMO instruments to make the III Code and auditing mandatory.

The IMO is expected to commence preparatory work for the commencement of an institutionalized Audit Scheme in 2014 after adoption of the Audit Standard (IMO Instruments Implementation Code (III Code)) and the revised Framework and Procedures by the 28 Session of the IMO Assembly meeting in November 2013.  It is envisaged that amendments to the relevant mandatory IMO instruments to make the III Code and auditing mandatory will enter into force by 2016.

The III Code is intended to become mandatory through the adoption of amendments to the relevant IMO instruments. So far, MEPC 64 and MCS 91 approved the draft III Code, with the associated draft Assembly resolution, as drafted by FSI 20, for submission to 28.Assembly session, in November 2013, for adoption.

It is reasonably expected that the Audit Scheme will bring about many benefits, such as identifying where capacity-building activities (for example, the provision of technical assistance by IMO to Member States) would have the greatest effect. Targeting of appropriate action to improve performance would be greatly improved. The Member States themselves would receive valuable feedback, intended to assist them in improving their own capacity to put the applicable instruments into practice; and generic lessons learnt from audits could be provided to all Member States so that the benefits could be widely shared.

Showing the way for ‘Enhancing Safety by Ergonomic Design’ Sumithran Sampath presented guidelines for preventing human error abroad ships through the Ergonomic Design of marine machinery- systems. He defined Ergonomics (or human factors) as being the scientific discipline concerned with the understanding of interactions among humans and other elements of a system, and the profession that applies theory, principles, data and methods to design in order to optimize human well-being and overall system performance.

For successful implementation of the guidelines, a smooth flow of information amongst the crew members and between the various equipment systems and between the crew members and equipment systems is important to ensure safety. The most important ergonomic element of these is the communication between operator and equipment. In other words, the ergonomic design of the man-machine interface is important for ensuring a smooth flow of information. Ergonomic design is expected to make the working environment of marine equipment systems more effective and safe as well as minimize any reduction in the workability of crew members and occurrence of errors. In addition, the introduction of ergonomic design criteria would definitely increase the standardization of controls, indicators, marking, coding, labeling and arrangement, thus making usage more consistent. Furthermore, much higher standards can be ensured by considering the convenience of maintenance and inspection at the design stage.

These guidelines emphasize the ergonomic aspect of marine machinery systems provided aboard ships, mainly in control stations, working spaces and engine rooms to ensure that the consideration is given to the mutual interaction between crew members and equipment systems in the design and installation stages.

Mr. Sampath touched upon a number of cases of accidents and losses suffered where simple measures like posting labels or provision of instruction label specifying the procedures necessary to be followed that could have gone a long way in preventing human errors and ensure safety of the crew and ship. He underscored the need to focus on tool, the task, and the environment in order to find the best combination for the workers. For improvements in operability and working environment it is necessary to ensure that the operability is not poor or inconvenient or encounters obstacles during operations.

On the third topic Cdr S. Navaneetha Krishnan referred to his recently released book on “Prosperous Nation Building through Shipbuilding”, for making his presentation on “Indian Ship building – Past, Present and Future”. He traced the history of the illustrious past of the Indian ship building activity starting from the Bronze Age giving a detailed account of this industry through the ancient era and right up to the current position as it exists today.

“Lessons from history help to formulate future strategies,” he pointed out. “The global trends in commercial shipbuilding since the industrial revolution period to date, had a bearing on the success stories of leading shipbuilding nations including the UK, USA, Japan, Korea and China. Analysis of this performance indicates the benefits accrued by them through ship building.”

He examined the productive measurements in ship building and identified the relevant features which have a bearing on the Indian ship building industry.  He explained how the usage of Data Envelopment Analysis, a mathematical liner programming technique as an appropriate tool to measure total productivity, and for employing it to enhance productivity as well as profitability. Using some case studies he explained various ways profitability in ship building could be enhanced by way of cost-cutting techniques.

He ended up by presenting the current scenario of the ship building activity in India. Giving details of various players in the field he highlighted in short the performance of the private players and the government owned ship yards which totally contributes to a mere 1.3 per cent to the global ship building.