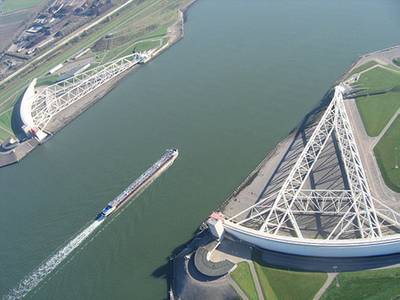 The Maeslantkering is a huge storm-surge barrier between the Nieuwe Waterweg and the Scheur River in the Netherlands.  The waterway serves as the entrance to Europoort and the Rotterdam harbor.  It also can provide access to storm waters to the interior of Netherlands, as has occurred during severe storms in the past.  While it would have been relatively easy to build a dike across this waterway, as has been done between the North Sea and major portions of the Netherlands, this would have resulted to the demise of one of the nation’s leading economic engines.  After considering several options, it was decided to construct a pair of arc-shaped barriers that would normally be stored on land, but could be swung out to block the waterway when necessary.  The large floating gates are located in dry docks built into levees on either side of the 1000-foot wide waterway.  A sill has been constructed across the bottom of the waterway, aligned with the position of closed gates.  A large (35-foot diameter) ball-shaped joint serves as the pivot-point for each gate, with 700-foot long arms connecting the joint and the gate.  When the waterway is to be closed, the dry docks are flooded, causing the gates to float in the water.  The gates are then swung out into the waterway by locomobiles.  As the two gates come together, they are flooded and sink into the sill, blocking the waterway.   The Maeslantkering is operated by a computer system and is designed to close when a storm surge of 3 meters or more is forecast.  Four hours before closure starts, incoming and outgoing ships are warned.  Two hours prior to closure, marine traffic in the waterway is halted.  When completed in 1997, it was expected that the gates would need to be closed for storm surge once every ten years.  On 8 November 2007, weather conditions resulted in the system being activated.  That has been, to date, the only occasion on which the system was called on.  It is tested annually though, with the gates closing for a brief period each time, usually in late September or early October, prior to arrival of winter storms.  The most recent test was on 22 September 2013.