An island without a country (or with two) 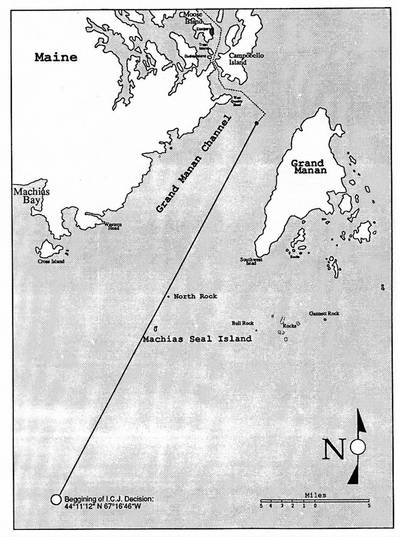 Machias Seal Island is located along the centerline of the Gulf of Maine, separating Maine and the United States from Nova Scotia and Canada.  It is treeless and relatively flat, with a surface area of approximately 19.8 acres.  The island lies 9.9 miles from Cutler, Maine and 11.8 miles from Grand Manan Island, Nova Scotia.  The island is considered to have little direct economic value and there is no indication of oil or gas reserves in the vicinity.  Its coastal waters, though, support an active fisheries, particularly with respect to lobster.  The Canadian Government built a lighthouse on Machias Seal Island in 1832.  A successor lighthouse is still in operation, manned by two keepers from the Canadian Coast Guard.  These two individuals (replaced monthly from the mainland) are the only ‘permanent’ residents, other than the numerous sea birds that nest on the island.  In fact, the island frequently receives visitors embarking from both Nova Scotia and Maine with an interest in bird watching and research.  It is the location of Machias Seal Island and the vague wording of the Treaty of Paris, ending the American Revolutionary War, that make the island of interest today.  Article 2 of the Treaty defines the boundary between British North America and the United States.  It provides for recognition by the British Government of US sovereignty over all islands in the Atlantic Ocean within twenty leagues (60 nautical miles) of any part of the shores of the United States between the boundaries of Nova Scotia and East Florida.  The boundary of Nova Scotia is not clearly delineated in the Treaty and little thought was given to uninhabited Machias Seal Island for years thereafter.  It was only when shipping interests in Saint Johns, New Brunswick lobbied for a lighthouse to mark the entrance to the Grand Manan Channel that the lighthouse was finally constructed.  When major fishing disputes in the Gulf of Maine between the United States and Canada reached a boiling point in the mid-1970’s, the two nations agreed to seek resolution in the International Court of Justice (ICJ).  Normally, the decision in the fisheries dispute would have also addressed and resolved the dispute concerning jurisdiction over the adjacent island.  The two nations, though, were unwilling to allow this seemingly minor issue be resolved by a third party.  Thus, they exempted the island dispute from the jurisdiction of the ICJ in the fisheries dispute.  This creates what is called a “gray zone” on and around Machias Seal Island where sovewreignty is quietly disputed to this day between two friendly neighbors.