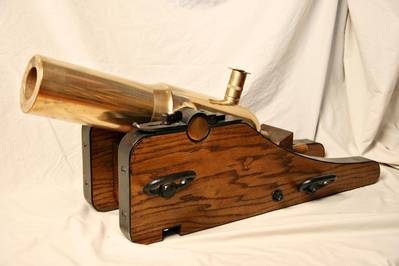 The Lyle gun is a short-barreled cannon designed for the rescue of persons in distress by the firing of a projectile with a line attached for the purpose of allowing for transport of those persons to a place of safety.  Line-throwing guns had been in use for years, albeit ineffectively, when in 1877 Sumner Kimball, Superintendent of the US Life-Saving Service, appealed to the US Army Board of Ordnance to develop a better means of reaching those sailors in distress on vessels wrecked along the US shoreline.  The mission was assigned to Captain David A. Lyle, US Army, a graduate of West Point and the Massachusetts Institute of Technology.  After research and testing, he proposed a smooth-bore gun with a 2 and one-half inch bore and a 24 inch length.  The cannon and its mount weighed approximately 150 pounds.  The bronze projectile was just less than 16 inches in length and weighed 19 pounds.  A wrought iron bolt with an eye-loop at one end was screwed into the base of the projectile.  The cannon would be charged with between 1.5 ounces and 8 ounces of specially prepared black powder (depending upon the distance the projectile was expected to travel).  A shotline of appropriate length was attached to the eye-loop and the projectile was inserted into the bore of the cannon with the eye-loop sticking out.   The shotline was made of waterproof braided linen.  Hemp had been tested, but proved too brittle.  Regular linen soaked up too much water and could not be used again until thoroughly dried.  Even new waterproof braided linen was too stiff for this important work and had to be fired several times to gain the necessary flexibility.  A critical part of the process involved flaking the shotline – carefully placing the line in a prescribed pattern in the flaking box so that it would pay out smoothly when the cannon was fired.  The cannon was aimed so as to fire the projectile to pass over the distressed ship, causing the shotline to land on the ship or in its rigging.  The mariners in distress would haul a heavier line out from shore and secure it to the ship.  A breeches-buoy or other life-saving apparatus would then be used to bring those on board safely to shore.  The Lyle gun was replaced by the Coast Guard in 1952 with line-throwing rockets, and eventually with helicopters.  Many sailors, and not a few passengers, though owed their lives to proficient use of the Lyle gun by surfmen of the US Life-Saving Service.