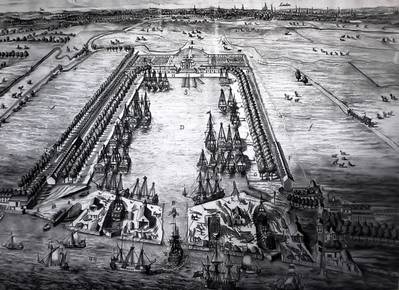 Liverpool was a secondary port until two events occurred at about the same time.  First, the Dee River silted up, cutting off access to the then-larger port of Chester, just south of Liverpool.  Second, at the urging of Sir Thomas Johnson, the Liverpool City Council approved funding for the construction of the world’s first wet dock.  The tidal range at Liverpool is substantial, making the lading and unlading of ships slow.  To rectify this situation, the City hired Mr. Thomas Steers of London to wall in part of the Liverpool Pool (Mersey estuary).  Brickwork was laid across the mouth of the old Pool and the marshy upper reaches were closed and partially filled in.  Work started in 1709 and was completed on 31 August 1715.  The three acre enclosure could accommodate up to 100 ships at a time, but averaged less than half that.  The change, though, was significant.  Previously, ships took two weeks to turn around, loading and unloading by hand while being interrupted by the tides.  In the wet dock, tides were non-existent.  Ships could be turned around in two days.  Almost overnight, Liverpool became a major seaport.  At its high point at the end of the nineteenth century, 9% of the world’s trade moved through the Port of Liverpool.  The City Council’s investment of £12,000 in 1709, considered risky at the time, was later considered prescient.  The Old Dock was filled in in 1826, by that time proving to be too small for the newer and larger ships.  It was supplanted by newer and larger wet docks, such as Queen’s Dock, Victoria Dock, and Albert Dock, all still in use today.  The Old Dock was filled in and largely forgotten until rediscovered during excavations in 2001.  Portions have been restored and incorporated into the Merseyside Maritime Museum.