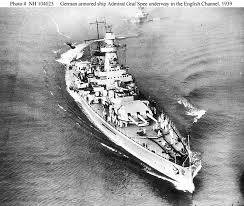 The heavy cruiser Kriegsmarine Ship (KMS) Admiral Graf Spee was laid down is 1932.  It was assigned a nominal displacement of 10,000 long tons so as to comply with the Treaty of Versailles, but its actual displacement was significantly greater (over 14,000 long tons light load and over 16,000 long tons full load).  It carried two triple turrets of eleven-inch guns.  Even though heavily armored, with its eight diesel engines, it could reach a speed of 28 knots.  What it couldn’t out-shoot, it could probably out-run.  For those reasons, it was commonly referred to as a pocket battleship.  Commissioned in 1936, during the height of the Nazi military buildup, it was the first ship to be equipped with “Seetakt”, an early version of radar.  The ship was deployed on various propaganda port calls around the Atlantic, including several to Spain to show support for General Franco’s Nationalist faction.  As war loomed in August 1939, KMS Admiral Graf Spee was deployed to the South Atlantic to serve as a commerce raider and to block Allied naval movements in the area.  On 30 September, it captured and sank the cargo ship Clement off the coast of Brazil, but not before allowing the crew to board lifeboats.  The master and chief engineer, though, were taken prisoner.  On 5 October, it captured the freighter Newton Beech and on 8 October sank the cargo ship Ashlea.  The freighter Huntsman was captured on 10 October.  On 15 October, the heavy cruiser rendezvoused with its supply ship Altmark.  While refueling and loading needed supplies, prisoners were transferred to Altmark.  Between late October and late November, Graf Spee cruised the southwest Indian Ocean, sinking several more freighters.  Returning to the South Atlantic, it again rendezvoused with Altmark.  After sinking several more freighters and transferring more prisoners to Altmark, Graf Spee proceeded to waters off Montevideo where more potential targets were expected.  On the morning of 13 December, three Royal Navy cruisers: HMS Exeter, HMS Achilles, and HMS Ajax were encountered.  While Graf Spee was more heavily armed and faster, the dispersion of the British ships prevented the German ship from concentrating its fire.  The battle lasted less than two hours.  The British ships suffered more casualties and more damage, but damage to Graf Spee was particularly telling in that both the fuel oil purification equipment and the desalination plant had been destroyed.  The only port in the vicinity capable of making the needed repairs was Montevideo in neutral Uruguay.  In port, the injured crew members were sent to hospital, the dead were buried with full military honors, and the remaining prisoners were released.  The Government of Uruguay advised that, in accordance with international law, the German warship could remain in port for only 72 hours before it would be interred for the duration of the conflict.  Meanwhile, British intelligence broadcast bogus radio messages indicating that a sizable Royal Navy flotilla was converging off the mouth of the River Plate, waiting for the KMS Admiral Graf Spee to come out of port.  Knowing that ship was incapable of a voyage back to Germany and fearing that it could not hold off a sizable Royal Navy attack if it tried to flee to Buenos Aires, Captain Hans Langsdorff, with Berlin’s approval, ordered that the ship be scuttled.  On 18 December, with a skeleton crew on board, KMS Admiral Graf Spee moved out into the roadstead, where the scuttling charges were detonated and the ship sank after the crew was evacuated to an Argentinian tug.  Two days later, Captain Langsdoff committed suicide in his hotel room in Buenos Aires.  The wreck was finally removed in 2004 as a hazard to navigation.