Poor planning and an adverse Arctic summer resulted in the loss of the ship and eleven crew members. 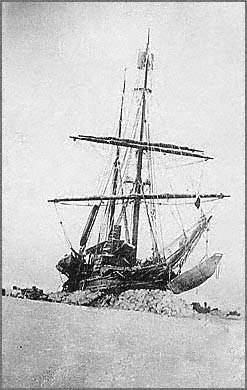 As late as the early years of the twentieth century, major portions of the Canadian Arctic (particularly in the Arctic Archipelago) were unexplored and uncharted.  In 1912, the Canadian anthropologist Vihjalmur Stefansson proposed the Canadian Arctic Expedition to fill in blanks on the maps and learn more of the native Inuit.  Initially, funding was obtained from various US organizations, including the National Geographic Society, but eventually the Canadian Government assumed responsibility for the expedition.  Due to time constraints, Stefansson hurriedly selected the Karluk as the expedition’s principal ship.  The Karluk was a 129-foot long brigantine built in Benicia, California in 1884 as a fishing industry vessel.  It was later converted for whaling and a two-inch sheathing of ironwood was installed on the bows and sides.  Stefansson had some reinforcing placed in the ship, but made few other changes.  The engine, which was underpowered for the voyage intended, was unaltered.  The crew and expedition members were hastily selected and the equipment and supplies were not well organized.  The Karluk left Esquimalt on June 17, 1913, headed to Herschel Island off the western Canadian Arctic mainland, where it was to meet up with other expedition participants.  On August 1, even before reaching Point Barrow, the ship encountered the permanent ice pack.  Going was slow from then on.  About half way between Point Barrow and Herschel Island, the Karluk was beset in the ice.  The ship was carried back west and then north, eventually ending up about 140 miles north of Wrangel Island.  On January 11, 1914, the Karluk was crushed in the ice.  The crew and expedition members evacuated onto the ice and soon began trekking to Wrangel Island.  An advance party of four struck out to blaze a trail, but was never seen alive again.  The main party continued their march, but disputes were causing dissention.  On February 5, another party of four struck out on their own – never to be heard from again.  On March 12, the remaining individuals finally reached Wrangel Island, but with limited supplies.  On March 18, Captain Robert Bartlett and one Inuk hunter began a hike over the sea ice to reach the Siberian mainland and assemble a rescue party.   On April 4, the two reached the mainland, where they met some Chukchi natives and received some relief.  They continued to the Bering Sea coast and obtained passage to Alaska, where they alerted the commanding officer of the Revenue Cutter Bear of the situation.  The Bear was headed north for its annual patrol and took Captain Bartlett aboard.  Due to the length of the voyage and the heavy ice conditions, the Bear eventually had to return to Nome for additional coal.  Meanwhile, the Expedition headquarters, having learned belatedly of the circumstances, hired a US walrus hunting vessel, the King and Winge, to sail to Wrangel Island.  The King and Winge reached Wrangel Island on September 7 and collected the fourteen survivors (three men had died on the island awaiting rescue).  The survivors were eventually transferred to the Bear, which had Captain Bartlett on board.  Bartlett was celebrated as a hero.  Stefansson, the overall expedition leader, who had left the Karluk before it started drifting in the pack ice, eventually returned from the Arctic with new discoveries, but under a heavy cloud of suspicion for his handling of the affair.  He never returned to the Arctic.  The other survivors resumed their routine lives.