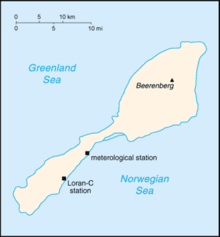 Jan Mayen is a small sperm-shaped island in the Arctic Ocean.  Comprising about 146 square miles, it is four times the size of Manhattan, but rather than the 1.8 million residents on the smaller but better known Manhattan, Jan Mayen boasts only 18 residents, but this can rise to 35 during the summer months.  The island lies on the northern edge of the Jan Mayen Microcontinent.  This microcontinent started out as part of the Greenland Plate, but like any self-respecting sperm, broke free and has lodged itself onto the western edge of the Eurasian Plate.  The larger, northern portion of the island includes the 7,000-foot high Beerenberg volcano.  Its 1970 eruption added over one square mile of land mass to the island.  Jan Mayen was discovered by Dutch whalers in 1614 and is named after one of the captains of one of the three whaling vessels that reached the island in rapid succession.  There are unsubstantiated reports that the island was discovered much earlier by Irish monks and by Vikings, but there is no evidence of human habitation on the island prior to 1614.  The Dutch used the island as a summer whaling station through the 1630s.  By then, whales were difficult to find in the nearby waters and the station was largely abandoned, but used occasionally by Danish whalers.  During the International Polar year 1882-83, a mapping station was built on the island.  Norwegian trappers hunted polar bears on Jan Mayen between 1900 and 1920, but the low numbers of such bears soon made it unprofitable.  The League of Nations gave Norway jurisdiction over the island in 1921.  The Norwegian Meteorological Institute established a station on the island, which was evacuated in spring 1940 after Germany invaded Norway.  The Germans attempted to establish their own weather station on the island in November 1940, but were intercepted by a British destroyer and the Germans were taken prisoner.  A Free Norwegian team of meteorologists returned in March 1941, providing vital reports to the Allies.  German bombers from northern Norway made several bombing runs on the island, but without effect.  The Norwegian Armed Forces established a Loran-C station on Jan Mayen in 1959.  The military personnel and the meteorologists constitute the only persons on the island.  They serve tours of either six or twelve months.