The red devil is migrating north 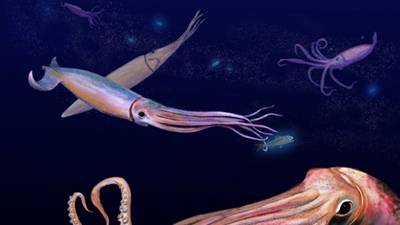 The Humboldt squid is a large predatory squid.  Its overall body can exceed six feet in length, with the mantle making up about four feet and the tentacles extending an additional two or more feet.  The adult weighs up to 100 pounds, which is intriguing since the mollusk’s lifespan is only one to two years.  It has eight arms and two slightly longer tentacles.  Each tentacle has between 100 and 200 suckers, with sharp tooth-like projections around each sucker.  When the Humboldt squid detects prey within range, it extends the tentacles at high speed, seizes the prey, and pulls it toward the sharp beak at the mouth.  The beak bites off pieces of flesh, injests the piece, and then grabs another until the flesh is fully consumed.  Any bones and shell are rejected, the beak apparently lacking the strength to break those hard objects.  The animal’s brain is larger than might be assumed, leading some to believe that the Humboldt squid may have intelligence comparable to that of a dog.  Its three hearts pump purple blood throughout the body.  The traditional home of this squid is in the Humboldt Current off the Pacific coast of South America, where it spends the daytime in depths of about 2,000 feet and its nights at about 500 feet.  It feeds primarily on small fish, crustaceans, smaller squid, and octopus, but it not infrequently turns cannibalistic, attacking smaller or injured compatriots.  By ejecting water through its hyponome or siphon, it can for short distances attain a speed of up to thirteen knots.  It uses its two triangular fins for steering and can exhibit great agility.  Similar to other squid, it possesses bioluminescent photophores on its mantle.  These photophores can flash rapidly, primarily in red and white.  The displays are used primarily while hunting, apparently to confuse prey, but also seem to be used as a rudimentary form of communication between individuals.  In recent years, possibly due to El Nino occurrences, the Humboldt squid has expanded its range north, first to Mexico, then to California, and is now being found off Oregon, Washington, British Columbia, and (occasionally) off Alaska.  Large schools of the squid are now found in the Gulf of California and have spawned a lucrative fishery.  It is known informally as diablo rojo or the red devil because it displays a bright red color when hooked by a fisherman.