The sloop that revolutionized the Royal Navy 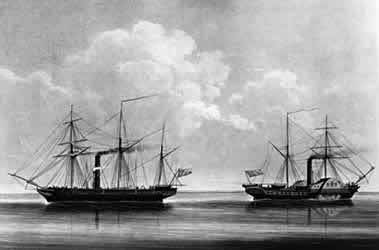 A steam-powered side-wheeler with the tentative name HMS Ardent was under construction in Sheerness when the Royal Navy decided to begin its own experiments with screw propulsion.  When commissioned in 1844, the newly-named HMS Rattler became the second warship in the world to be propelled in this new manner.  It did not, though, suffer any dramatic failure as befell the USS Princeton.  Instead, the Royal Navy utilized the Rattler in an extended series of experiments and trials to determine the effectiveness of screw propulsion for its future warships.  Screw propulsion offered two distinct advantages for warships.  First, it freed up vital deck space for placement of guns that were otherwise blocked by the side-wheel and its housing.  Secondly, the propeller was not directly exposed to potential enemy fire, as was the side-wheel.  The problem, though, was that no one knew how to make an optimal propeller.  The Rattler was used to test three different propellers, which were modified to make a total of six different designs.  The propellers ranged between 6.0 and 9.5 feet in diameter.  Eventually, the Rattler was fitted with a propeller 9.8 feet in diameter and with a pitch of 11 feet.  Experiments continued.  In March and April 1845, competitions were held between the Rattler and the side-wheel sloop HMS Alecto.  The Alecto was slightly shorter, but had exactly the same nominal horsepower as the Rattler.  On an 80-mile course off the Nore in calm weather, Rattler defeated Alecto by 23 minutes.  On a 60-mile course against a head sea, Rattler won by 40 minutes.  Finally, the two sloops were fastened stern-to-stern and each got underway.  The Rattler soon was towing the Alecto at 2.5 knots.  Thereafter, almost all new Royal Navy ships were built with propellers rather than side-wheels.  The Rattler went on to serve with quiet distinction, until it was broken up in 1856.